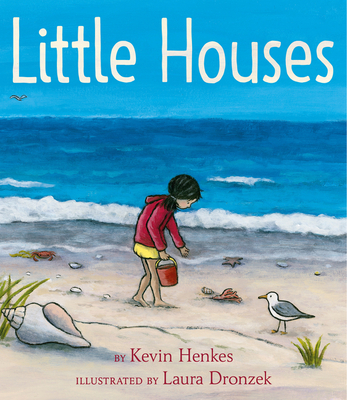 “As always, Kevin Henkes and Laura Dronzek deliver a superb picture book that will delight little ones with promises of the beach and wax nostalgic for adults. A gorgeously told story of keeping wonder alive. I want to live in this book.”
— Katie Fransen, The Novel Neighbor, Webster Groves, MO

From award-winning and bestselling author Kevin Henkes and the acclaimed painter Laura Dronzek, Little Houses is an unforgettable masterpiece about nature, family, wonder, and the ocean. The lyrical writing and stunning paintings make this a great choice for family sharing and for story times all year round.

When a young girl visits her grandparents at the beach, she stays in a little house and walks along the shore gathering seashells—which were once little houses of their own. As she wanders the beach, she wonders about the creatures who used to live in each shell, about the hidden treasures of the sea, and about the mysteries of the world.

Kevin Henkes’s text features striking imagery, depth of emotion, and a lovely multigenerational relationship. He deftly captures the feeling of wonder and imagination that is fostered by a trip to the shore. Laura Dronzek’s lush, saturated paintings make this book a true treasure for parents and children, and a must-have for the classroom.

Kevin Henkes has been praised both as a writer and as an illustrator and is the recipient of the Children’s Literature Legacy Award for his lasting contribution to literature for children. He received the Caldecott Medal for Kitten’s First Full Moon; Caldecott Honors for Waiting and Owen; two Newbery Honors—one for Olive’s Ocean and one for The Year of Billy Miller—and Geisel Honors for Waiting and Penny and Her Marble. His other books include Sun Flower Lion, A Parade of Elephants, Chrysanthemum, and the beloved Lilly’s Purple Plastic Purse. Kevin Henkes lives with his family in a house in Madison, Wisconsin.

Laura Dronzek is a painter whose work has been exhibited nationally. Her picture books include Moonlight, by Helen V. Griffith; It Is Night, by Phyllis Rowand; and White Is for Blueberry, by George Shannon.

“A pigtailed child visits her grandparents at the shore, where the waves call them to explore the sands just outside the steps of their small seaside house. . . . The girl and her grandmother search for shells of every kind . . . [and] she begins to wonder about the inhabitants of these tiny homes. . . . Henkes and Dronzek’s latest pitch-perfect collaboration offers an intimate multigenerational narrative that captures children’s hopeful curiosity about our shared home.” — Horn Book (starred review)

“A marvelous book . . . Kevin Henkes and Laura Dronzek have created an ode to curiosity that urges readers to open their minds and wonder at the world. . . . Every page of Little Houses reminds readers of the infinite ways that oceans, animals, plants, and people are connected.”   — BookPage (starred review)

“Henkes and Dronzek create a story about a child . . . whose visit to a grandparents’ small beach house allows time for wondering and questioning. . . . The grandparents’ quiet, affirming presences allow their grandchild space to contemplate. . . . For now, though, the child treasures a collection of shells, little houses. Henkes writes with quiet grace that avoids preciousness, while Dronzek’s acrylic seashore-centered spreads capture one person encountering the natural world with curiosity and reverence.” — Publishers Weekly

“Curiosity and wonder about nature are explored, this time through a family trip. . . . As they walk the beach, the child studies the shells and considers the creatures that once lived in them. Vibrant acrylic illustrations depict these little houses in multiple colors, sizes, and shapes. . . . Her grandparents encourage her to explore her surroundings, inspiring her to want to learn more. . . . Returning to her own house, the girl takes some of the treasures along, understanding that she, too, is part of the wonderful wider world.” — Booklist

“In this poetic, reassuring picture book meditation, a girl is swept up in wonderment after her grandmother reminds her that the shells on the beach are tiny houses.” — Shelf Awareness