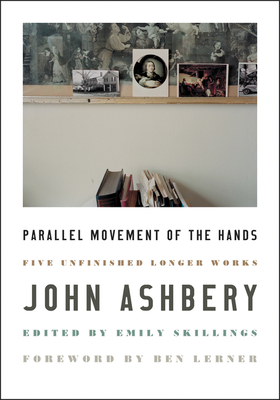 Renowned for his inventive mind, ambitious play with language, and dexterity with a wide range of tones and styles, John Ashbery has been a major artistic figure in the cultural life of our time. Parallel Movement of the Hands gathers unpublished, book-length projects and long poems written between 1993 and 2007, along with one (as yet) undated work, to showcase Ashbery’s diverse and multifaceted artistic obsessions and sources, from children’s literature, cliffhanger cinema reels, silent films, and classical music variations by Beethoven’s pupil Carl Czerny to the history of early photography. Ashbery even provides a fresh and humorous take on a well-worn parable from the Gospel of Matthew. These works demonstrate that while producing and publishing the shorter, discrete poems often associated with his late career, Ashbery continued to practice the long-form, project-based writing that has long been an important element of his oeuvre.

Edited and introduced by Ashbery’s former assistant poet Emily Skillings and including a preface by acclaimed poet and novelist Ben Lerner, this compelling and varied collection offers new insights into the process and creative interests of a poet whose work continues to influence generations of artists and poets with its signature intertextuality, openness, and simultaneity. A landmark publication of never-before-seen works, this book will enlighten scholars as well as new readers of one of America’s most prominent and celebrated poets.

John Ashbery was born in Rochester, New York, in 1927. He wrote more than twenty books of poetry, including Quick Question; Planisphere; Notes from the Air; A Worldly Country; Where Shall I Wander; and Self-Portrait in a Convex Mirror, which received the Pulitzer Prize for Poetry, the National Book Critics Circle Award, and the National Book Award. The winner of many prizes and awards, both nationally and internationally, he received the Medal for Distinguished Contribution to American Letters from the National Book Foundation in 2011 and a National Humanities Medal, presented by President Obama at the White House, in 2012. Ashbery died in September 2017 at the age of ninety.

"With the publication . . . of Parallel Movement of the Hands, the uncanny sense that Ashbery is still with us continues, as five unpublished (and unfinished) projects are brought into a single volume, lovingly edited and introduced by Emily Skillings. . . . The poems in Parallel Movement of the Hands still chirp with the familiar music of Ashbery’s many-textured lyricism." — Los Angeles Review of Books

"[These poems] metaphorically keep alive the poet who is physically no longer with us, as well as the other makers and dreamers who aroused his gigantic imagination."
— New York Review of Books

"Every word in a poem requires decision, but whether that decision is correct may be a delusion the author indulges if for no other reason than to move on to the next word, the next line. Ashbery recognized the porous border between decision and delusion, between finality and its seeming appearance. This collection of unfinished works allows readers to tread that border as well." — Poetry