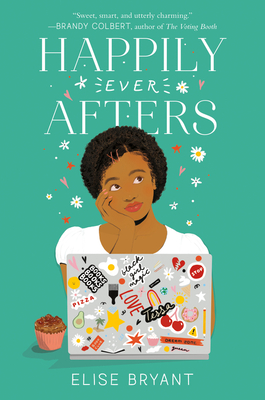 “I loved Happily Ever Afters. It’s one of those wonderful reads that leaves its readers nose-wrinklingly happy. It’s a wonderful exploration of new and old best friends, family dynamics, and the pressure we put on ourselves and on living up to the expectations of others that can sometimes lead to paralysis. This book is absolutely lovely, and I’d easily pick it up to read it again.”
— Brittany Bunzey, Read With Me, A Children's Book & Art Shop, Raleigh, NC

Jane the Virgin meets To All the Boys I’ve Loved Before in this charming debut romantic comedy filled with Black Girl Magic. Perfect for fans of Mary H. K. Choi and Nicola Yoon, with crossover appeal for readers of Jasmine Guillory and Talia Hibbert romances.

Sixteen-year-old Tessa Johnson has never felt like the protagonist in her own life. She’s rarely seen herself reflected in the pages of the romance novels she loves. The only place she’s a true leading lady is in her own writing—in the swoony love stories she shares only with Caroline, her best friend and #1 devoted reader.

When Tessa is accepted into the creative writing program of a prestigious art school, she’s excited to finally let her stories shine. But when she goes to her first workshop, the words are just...gone. Fortunately, Caroline has a solution: Tessa just needs to find some inspiration in a real-life love story of her own. And she’s ready with a list of romance novel-inspired steps to a happily ever after. Nico, the brooding artist who looks like he walked out of one of Tessa’s stories, is cast as the perfect Prince Charming.

But as Tessa checks each item off Caroline’s list, she gets further and further away from herself. She risks losing everything she cares about—including the surprising bond she develops with sweet Sam, who lives across the street. She’s well on her way to having her own real-life love story, but is it the one she wants, after all?

Elise Bryant was born and raised in Southern California. For many years, Elise had the joy of working as a special education teacher, and now she spends her days writing swoony love stories and eating dessert. She lives with her husband and two daughters in Long Beach. Happily Ever Afters is her debut novel. You can visit her online at www.elisebryant.com.

“Caught between pursuing a tale-worthy love and slowly losing herself, Tessa must learn to tell a story that’s uniquely hers. Debut author Bryant creates a wholly genuine protagonist in Tessa; readers will surely root for her as she finds her voice.” — Publishers Weekly (starred review)

“Nimbly blends bubbly, will-they-won’t-they teen romance with a frank look at issues ranging from impostor syndrome and identity to race and mental health. Bryant treats the tough stuff with nuance and compassion through conversations among a richly drawn cast of diverse and appealing characters…. [and] delightful examples of strong, healthy friendships.” — BookPage (starred review)

“A captivating, complicated, angst-y, and beautiful love story of a teenage girl trying to grow into and embrace herself. For romantics of all ages, especially those who seldom see themselves in lead roles.” — Kirkus Reviews

“Bryant’s debut will charm readers from the start…. Bryant seamlessly captures a broader view of the high-school experience through Tessa’s eyes, including such complications as pressure from her parents to be a better sibling and an uneasy long-distance friendship that seems to be floundering. While skillfully and realistically portraying Tessa's many challenges, Bryant never loses sight of the love story at the book's heart. Hand to fans of Jenny Han's To All the Boys I've Loved Before (2014) or Maurene Goo's I Believe in a Thing Called Love (2017).” — ALA Booklist

"Happily Ever Afters is sweet, smart, and utterly charming. Following Tessa as she navigates friendship, romance, and family dynamics was an absolute joy." — Brandy Colbert, author of The Voting Booth

“Happily Ever Afters is the warm, nerdy, big-hearted rom-com of my dreams and I dare you to read it without grinning your face off.” — Becky Albertalli, bestselling author of Simon vs the Homo Sapiens Agenda

"Happy Ever Afters is an absolute delight to read, and put a smile on my face from beginning to end. Elise Bryant’s charmer of a debut is an unapologetic love letter to every black and brown girl who’s ever dared to imagine herself at the center of her favorite romance. My heart is full knowing young romance lovers will get to read about a heroine like Tessa." — Adriana Herrera, author of American Dreamer