The Vortex: A True Story of History's Deadliest Storm, an Unspeakable War, and Liberation (Hardcover) 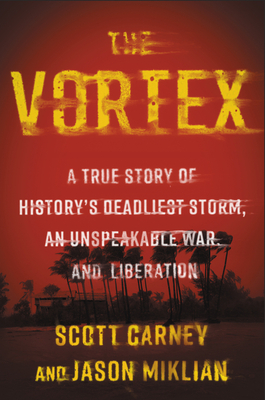 The Vortex: A True Story of History's Deadliest Storm, an Unspeakable War, and Liberation (Hardcover)

LONGLISTED FOR THE CARNEGIE MEDAL FOR EXCELLENCE

"Carney and Miklian write vividly in the fashion of a cinematic disaster flick." —The Washington Post

In November 1970, a storm set a collision course with the most densely populated coastline on Earth. Over the course of just a few hours, the Great Bhola Cyclone would kill 500,000 people and begin a chain reaction of turmoil, genocide, and war. The Vortex is the dramatic story of how that storm sparked a country to revolution.

Bhola made landfall during a fragile time, when Pakistan was on the brink of a historic election. The fallout ignited a conflagration of political intrigue, corruption, violence, idealism, and bravery that played out in the lives of tens of millions of Bangladeshis. Authors Scott Carney and Jason Miklian take us deep into the story of the cyclone and its aftermath, told through the eyes of the men and women who lived through it, including the infamous president of Pakistan, General Yahya Khan, and his close friend Richard Nixon; American expats Jon and Candy Rhode; soccer star-turned-soldier Hafiz Uddin Ahmad; and a young Bengali revolutionary, Mohammed Hai.

Thrillingly paced and written with incredible detail, The Vortex is not just a story about the painful birth of a new nation but also a universal tale of resilience and liberation in the face of climate emergency that affects every single person on the planet.

Scott Carney is an investigative journalist and anthropologist, as well as the author of the New York Times bestseller What Doesn’t Kill Us. He spent six years living in South Asia as a contributing editor for WIRED and writer for Mother Jones, NPR, Discover Magazine, Fast Company, Men’s Journal, and many other publications. His other books include The Red Market, The Enlightenment Trap and The Wedge. He is the founder of Foxtopus Ink, a Denver-based media company.

Jason Miklian, Ph.D., is a Senior Researcher at the Centre for Development and Environment, University of Oslo. Miklian has published over 60 academic and policy works on issues of conflict and crisis, based on extensive fieldwork in Bangladesh, Colombia, India, and the Congo. He serves on the United Nations Expert Panel on Business and Human Rights, has won several awards for his academic publications, and serves as an expert resource for various government knowledge banks in the US, UK, EU and Norway. Miklian has also written for or been cited in an expert capacity by the New York Times, BBC, The Economist, Washington Post, France 24, The Guardian, The Hindu (India) and NPR.

"[A] tremendous new book. . . . As much as The Vortex is about natural disasters and climate change, it is also about U.S. foreign policy: about how Washington’s expedient decisions can leave indelible marks on history thousands of miles away. . . . The Vortex should remind [the United States] of the need to stay vigilant with our partners, no matter the strategic benefits they may offer." — Boston Globe

"?A fast-paced work of narrative nonfiction. . . . Carney and Miklian write vividly in the fashion of a cinematic disaster flick. . . . Their mastery of documentary sources and previous scholarship is evident." — Washington Post

“If a butterfly flaps its wings, halfway across the world there will be a huge storm. . . . But what if you started with the storm? What unforeseen effects could that have? . . . The Vortex specifically focuses on how climate catastrophes can change the world in unpredictable ways.”  — NPR.com, "Book of the Day"

"The [vortex] in the title is literal and metaphorical. It refers not just to the political upheaval in late 1971 but also to Bhola, the cyclonic storm that barreled up the Bay of Bengal and hit the coast of East Pakistan. . . . The authors describe in harrowing detail nature’s assault on the island of Manpura. . . . Bhola was, in the authors’ telling, a perfect storm. . . . The authors tell [the story] with riveting panache." — Wall Street Journal

"Scott Carney and Jason Miklian craft top-notch narrative nonfiction from this complex story of natural disaster crossed with politics. . . . This is full of jaw-dropping stuff. . . . A readable, compelling narrative [that] arrives at a critical moment." — WhatsNonfiction.com

"Carney and Miklian reveal a long-concealed and profoundly shocking confluence of geopolitical crimes and crises. . . . As Carney and Miklian so dramatically recount, a natural disaster instigated a civil war and epic atrocities, the birth of Bangladesh, and, in a nightmarish twist, very nearly ignited a nuclear war between the U.S. and Russia. With propulsive narrative drive and intense specificity, the authors circle among a cast of riveting real-life characters. . . . Deeply involving and harrowing, this commanding work of reclaimed and clarified history is of urgent relevance."  — Booklist (starred review)

“[The Vortex] is a riveting, page-turning story of human devastation, political corruption, and individual bravery as well as a cautionary tale with universal relevance. . . . To those who may feel complacent about what happened a half-century ago in a relatively obscure part of the world, Carney and Miklian deliver a stark warning. . . . A powerful, timely exploration of an environmental and political tragedy.” — Kirkus Reviews (starred review)

"[Carney and Miklian] look to the past to predict the future of climate change. . . . Carney and Miklian make a persuasive case that as climate change produces more frequent and deadlier storms, the world faces 'an increasing likelihood of selective genocide and even global international war.' Shot through with colorful character sketches and lucid explanations of South Asian politics, this is an urgent warning about the links between global warming and geopolitical turmoil." — Publishers Weekly

“Among the greatest threats posed by climate change are dangerous supercharged storms powered by warming oceans. But their catastrophic destruction isn't limited to lives and property; sometimes even entire political ecosystems are at risk. In The Vortex, Scott Carney and Jason Miklian take us on a riveting journey into the deadliest storm ever. They reveal not only the devastating human toll but also how it triggered a horrific genocide and war. In the absence of meaningful climate action, climate disasters threaten to increasingly force humans into conflict, making The Vortex an urgent wake-up call for our shared global future.” — Michael E. Mann, Distinguished Professor of Atmospheric Science, Penn State University, and author of The New Climate War: The Fight to Take Back Our Planet

“The catastrophic Bhola cyclone and the bloody liberation war it triggered in now-Bangladesh get the high-octane storytelling they deserve in The Vortex. A tsunami of a book that reveals the horrors of climate change and a US-backed genocide, as well as the joys of solidarity and national liberation, told through the stories of people who were right there on its frontlines.”
— Naomi Hossain, professor of global development, American University

“This book makes you feel like you're living through the traumatic birth of Bangladesh, a beautiful and resilient country that has overcome near-impossible odds. But if we don't quickly bring climate change under control, those experiences of our past could foreshadow our next great global tragedy. The Vortex is a stark reminder that the power of nature can either be tempered by human wisdom, or amplified by our shortsighted greed and hunger for power. An epic tale indeed!” — Bill McKibben, author The End of Nature, educator, environmentalist, and Co-founder of 350.org

"An utterly gripping story of international political intrigue, natural disaster, and the consequences for millions as refracted through the experiences of the ordinary, powerless people. The births of nations are rarely without drama and in the case of Bangladesh, though now an economic miracle, it began with all the tragedy that could befall one of the world's poorest countries. The Vortex provides timely instruction for the age of climate change in how politics and environmental pressures combine explosively." — Zia Haider Rahman, James Tait Black Memorial Prize–winning author of In the Light of What We Know

“This is a rich tale of a terrible cyclone and the human folly that deepened the tragedy. Grippingly written, it is both a powerful history of the creation of modern Bangladesh and an urgent warning about our precarious common future on our rapidly heating planet.”
— Gary J. Bass, author of The Blood Telegram