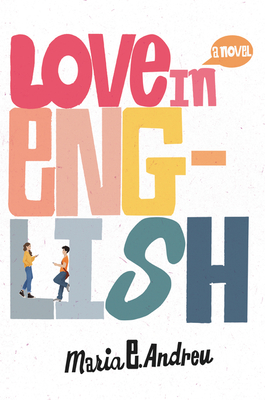 “This a beautiful YA novel, written from a teenage Argentinian immigrant’s point of view, skillfully represents the idiosyncrasies of Americans and sometimes-painful teenage interactions. In addition to the first-person narrative, there are also whimsical ‘handwritten’ notes Ana takes in her journal as part of her assignment for her English language class. Her musings about being transplanted to a new country and reuniting with her father, who came to America three years before she and her mom could join him, give a wonderfully nuanced perspective.”
— Emily Autenrieth, A Seat at the Table Books, Elk Grove, CA

A fresh, joyful YA novel that is layered with themes of immigration, cultural identity, and finding your voice in any language.

Sixteen-year-old Ana is a poet and a lover of language. Except that since she moved to New Jersey from Argentina, she can barely find the words to express how she feels.

At first Ana just wants to return home. Then she meets Harrison, the very cute, very American boy in her math class, and discovers the universal language of racing hearts. But when she begins to spend time with Neo, the Greek Cypriot boy from ESL, Ana wonders how figuring out what her heart wants can be even more confusing than the grammar they’re both trying to master. After all, the rules of English may be confounding, but there are no rules when it comes to love.

With playful and poetic breakouts exploring the idiosyncrasies of the English language, Love in English is witty and effervescent, while telling a beautifully observed story about what it means to become “American.”

Maria E. Andreu is an Argentinian American author whose work has appeared in Teen Vogue, Newsweek, the Washington Post, and the Newark Star-Ledger. Her debut young adult novel, The Secret Side of Empty, was a Junior Library Guild Selection and a National Indie Excellence Book Award winner.

“Andreu creates a realistic portrait of the obstacles facing English language learners in the United States. Her characters are nuanced and their interactions endearing. Teenagers and adults alike will gain necessary perspective from reading this accessible story about a topic that affects millions. VERDICT An engaging novel about language, culture, and empathy. Highly recommended for all libraries.”  — School Library Journal (starred review)

“The teen love triangle at the center of this warm and humorous novel by Andreu is threaded with experiences that accompany acclimation to a new school and country. But as a budding poet (her journals punctuate the chapters), Ana’s real love affair is with language itself. Andreu captures Ana’s cultural and linguistic roller coaster with eloquence and precision, as Ana wonders “if learning one language doesn’t sometimes mean forgetting a little bit of another,” a process described as bittersweetly as coming-of-age itself.” — Publishers Weekly

“The novel, focusing on Ana’s experience as a documented immigrant, effectively explores the character’s struggle to navigate unlike cultures and languages while she learns to communicate in English, discovers different facets of herself, falls a bit in love, and ultimately finds her footing—and her voice—in the U.S. A wholesome immigration story with a healthy dose of romance on the side.”  — Kirkus Reviews

“Poems that explore the quirks, idioms, and inconsistencies of English blossom throughout the narrative, adding dimension to Ana's character. As she learns to navigate a new language, she's also navigating a new culture, reconciling her new way of life with her old family ways and working toward a compromise with her strict parents. Andreu bases Ana's story on her own experiences as an immigrant teen, and she depicts Ana with authenticity and grace.” — ALA Booklist