After Steve: How Apple Became a Trillion-Dollar Company and Lost Its Soul (Hardcover) 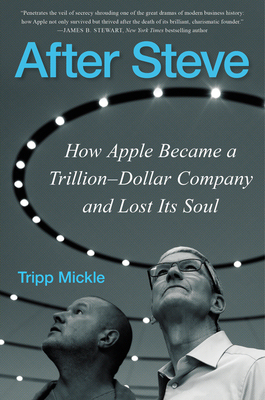 After Steve: How Apple Became a Trillion-Dollar Company and Lost Its Soul (Hardcover)

From the New York Times' Tripp Mickle, the dramatic, untold story inside Apple after the passing of Steve Jobs by following his top lieutenants—Jony Ive, the Chief Design Officer, and Tim Cook, the COO-turned-CEO—and how the fading of the former and the rise of the latter led to Apple losing its soul.

Steve Jobs called Jony Ive his “spiritual partner at Apple.” The London-born genius was the second-most powerful person at Apple and the creative force who most embodies Jobs’s spirit, the man who designed the products adopted by hundreds of millions the world over: the iPod, iPad, MacBook Air, the iMac G3, and the iPhone. In the wake of his close collaborator’s death, the chief designer wrestled with grief and initially threw himself into his work designing the new Apple headquarters and the Watch before losing his motivation in a company increasingly devoted more to margins than to inspiration.

In many ways, Cook was Ive’s opposite. The product of a small Alabama town, he had risen through the ranks from the supply side of the company. His gift was not the creation of new products. Instead, he had invented countless ways to maximize a margin, squeezing some suppliers, persuading others to build factories the size of cities to churn out more units. He considered inventory evil. He knew how to make subordinates sweat with withering questions.

Jobs selected Cook as his successor, and Cook oversaw a period of tremendous revenue growth that has lifted Apple’s valuation to $2 trillion. He built a commanding business in China and rapidly distinguished himself as a master politician who could forge global alliances and send the world’s stock market into freefall with a single sentence.

Author Tripp Mickle spoke with more than 200 current and former Apple executives, as well as figures key to this period of Apple’s history, including Trump administration officials and fashion luminaries such as Anna Wintour while writing After Steve. His research shows the company’s success came at a cost. Apple lost its innovative spirit and has not designed a new category of device in years. Ive’s departure in 2019 marked a culmination in Apple’s shift from a company of innovation to one of operational excellence, and the price is a company that has lost its soul.

Tripp Mickle is a technology reporter for The New York Times covering Apple. He previously covered the company for the Wall Street Journal, where he also wrote about Google and other Silicon Valley giants. He has appeared on CNBC and NPR, and previously worked as a sportswriter. He lives with his wife and German shorthaired pointer in San Francisco.

“Mickle builds a dense, granular mosaic of the firm’s trials and triumphs, showing us how Apple, built on Ive’s successes in the 2000s, became Cook’s company in the 2010s. The book is an amazingly detailed portrait of the permanent tension between strategy and luck: Companies make their own history, but they do not make it as they please.” — New York Times

“Mickle’s reporting is tremendous: He documents the life stories of both men and goes super deep on how they carried on at Apple post-Steve.”
— Wired

“A dynamic, eye-opening debut… Tech enthusiasts will find this meticulously researched report great fodder for debate on the future of Apple as a tech leader. A focused, perceptive assessment of the evolution of Apple’s alchemy.” — Kirkus Reviews

"[An] insightful debut, an unsparing take on the company’s post–Steve Jobs era.…There has been plenty written about Jobs and Apple; this sets itself apart with its shrewd look at how and why the company’s culture shifted. Apple devotees and skeptics alike will find much to consider." — Publishers Weekly

“Mickle penetrates the veil of secrecy shrouding one of the great dramas of modern business history: how Apple not only survived but thrived after the death of its brilliant, charismatic founder—and at what personal cost to his successors, Tim Cook and Jony Ive. After Steve is both a feat of reporting on what may be the most secretive company in the world and a gripping narrative that brings readers inside the “Spaceship,” Apple’s futuristic headquarters.” — James B. Stewart, author of New York Times bestsellers Den of Thieves, Blood Sport, and DisneyWar

“Pulls off the rare feat of illuminating Apple's spiritual misdirections through the life and times of Jony Ive before and after Steve Jobs's death. This extraordinary book has a lot of heart, but also lessons on how a visionary company can lose its soul in search of even greater profits." — Bradley Hope, co-author of the New York Times bestseller Billion Dollar Whale

“Mickle pierced Apple's culture of omerta' to deliver an intimate portrait of how Steve Jobs's top disciples -- Tim Cook, the inscrutable operator, and Jony Ive, the passionate artist -- grappled with the loss of their master and their own differences to bring his creation to unprecedented success.” — Sara Gay Forden, author of House of Gucci and editor at Bloomberg News, leading tech policy coverage

“It is just over a decade since Steve Jobs died but it seems like a century for Apple. Mickle's reportorial rigor breathes life into the dramas, personalities and events that shaped the era.”
— Michael Moritz, partner at Sequoia Capital and author of The Little Kingdom

“A fascinating look at Apple in the post-Jobs era. Mickle highlights the link between professional dynamics and personal relationships and how large-cap companies need different skills as they scale. A master class in how creatives and operators work together to build value.”
— Scott Galloway, best-selling author of The Four and Post Corona

“Mickle brings to life how Steve Jobs's successor, Tim Cook, for all his seemingly robotic demeanor, confronts a great many challenges that evaded Apple's founder -- including an increasingly hostile U.S.-China relationship. He examines in unprecedented detail the struggle faced by Cook in meeting competing demands from the two superpowers, and illuminates an issue that will come to define both the business and political world for many years to come.” — Lingling Wei, author of Superpower Showdown

“A thrilling account of the characters, intrigues, and decisions that drove Apple to become the world’s most valuable corporation. After Steve is sure to become the definitive account of the post-Jobs era at Apple.” — Bhu Srinivasan, author of Americana, Named a Best Book of 2017 by The Economist