Build: An Unorthodox Guide to Making Things Worth Making (Hardcover) 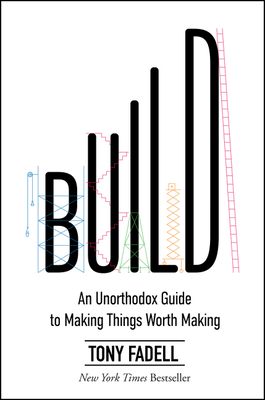 Build: An Unorthodox Guide to Making Things Worth Making (Hardcover)

So that’s what this book is. An advice encyclopedia. A mentor in a box.

Written for anyone who wants to grow at work—from young grads navigating their first jobs to CEOs deciding whether to sell their company—Build is full of personal stories, practical advice and fascinating insights into some of the most impactful products and people of the 20th century.

Each quick 5-20 page entry builds on the previous one, charting Tony’s personal journey from a product designer to a leader, from a startup founder to an executive to a mentor. Tony uses examples that are instantly captivating, like the process of building the very first iPod and iPhone. Every chapter is designed to help readers with a problem they’re facing right now—how to get funding for their startup, whether to quit their job or not, or just how to deal with the jerk in the next cubicle.

Tony forged his path to success alongside mentors like Steve Jobs and Bill Campbell, icons of Silicon Valley who succeeded time and time again. But Tony doesn’t follow the Silicon Valley credo that you have to reinvent everything from scratch to make something great. His advice is unorthodox because it’s old school. Because Tony’s learned that human nature doesn’t change. You don’t have to reinvent how you lead and manage—just what you make.

And Tony’s ready to help everyone make things worth making.

Tony Fadell started his 30 year Silicon Valley career at General Magic, the most influential startup nobody has ever heard of. Then he went on to make the iPod and iPhone, start Nest and create the Nest Learning Thermostat. Throughout his career Tony has authored more than 300 patents. He now leads the investment and advisory firm Future Shape, where he mentors the next generation of startups that are changing the world.

"Tony Fadell is one of the world’s great experts in starting companies and creating insanely great products. He’s distilled his wisdom in this book, providing wildly useful mentorship in a delightfully readable set of stories." — Walter Isaacson, author and biographer of Steve Jobs, Albert Einstein, and Leonardo da Vinci

"Tony Fadell has made more cool stuff than almost anyone else in the history of Silicon Valley, and in Build he tells us how. This is the most fun—and the most fascinating—memoir of curiosity and invention I've ever read." — Malcolm Gladwell, host of the podcast Revisionist History and author of Outliers and Talking to Strangers

“Based on hard-won, real-life lessons as an entrepreneur, Tony Fadell’s Build delivers priceless advice for any young person who wants to build something great or change the world for the better. I wish I had this book when I was twenty-one.” — Ben Horowitz, founding partner of Andreessen Horowitz

“Insightful. Funny. Instructive. Unvarnished. In a book brimming with energy and enthusiasm, Tony Fadell, builder of epoch-defining products, draws on his experience with failure and accomplishment to coach you through every stage of your career.” — Joanna Hoffman, former vice president of marketing at General Magic and member of the original Macintosh team

“Tony Fadell distills his epic career into refreshingly candid, often contrarian advice that you can put into practice right away. Whether you’re looking to build a great product, a creative team, a strong culture, or a meaningful career, Tony’s guidance will get you thinking and rethinking.” — Adam Grant, author of Think Again and host of the TED podcast WorkLife