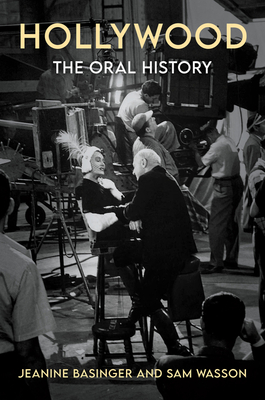 The real story of Hollywood as told by such luminaries as Steven Spielberg, Frank Capra, Katharine Hepburn, Meryl Streep, Harold Lloyd, and nearly four hundred others, assembled from the American Film Institute’s treasure trove of interviews, reveals a fresh history of the American movie industry from its beginnings to today.

From the archives of the American Film Institute comes a unique picture of what it was like to work in Hollywood from its beginnings to its present day. Gleaned from nearly three thousand interviews, involving four hundred voices from the industry, Hollywood: The Oral History, lets a reader “listen in” on candid remarks from the biggest names in front of the camera—Bette Davis, Meryl Streep, Tom Hanks, Harold Lloyd—to the biggest behind it—Frank Capra, Steven Spielberg, Alfred Hitchcock, Jordan Peele, as well as the lesser known individuals that shaped what was heard and seen on screen: musicians, costumers, art directors, cinematographers, writers, sound men, editors, make-up artists, and even script timers, messengers, and publicists. The result is like a conversation among the gods and goddesses of film: lively, funny, insightful, historically accurate and, for the first time, authentically honest in its portrait of Hollywood. It’s the insider’s story.

Legendary film scholar Jeanine Basinger and New York Times bestselling author Sam Wasson, both acclaimed storytellers in their own right, have undertaken the monumental task of digesting these tens of thousands of hours of talk and weaving it into a definitive portrait of workaday Hollywood.

Jeanine Basinger is the Corwin-Fuller Professor of Film Studies, founder and curator of the Wesleyan Cinema Archives, founding Chair of the Film Studies Department, and a recipient of Wesleyan’s Binswanger Prize for Excellence in Teaching. She is the author of Silent Stars, which won the National Board of Review’s William K. Everson Prize, and The Star Machine, which won the Theatre Library Association Award. She is a trustee of the National Board of Review and the American Film Institute, a member of Warner Brothers Theatre Advisory Committee at the Smithsonian Institute, and a former member of the Board of Advisors of the Association of Independent Video and Filmmakers. She also served as advisor to Martin Scorsese’s film foundation project, The Story of Movies. She lives in Middletown, Connecticut.

Sam Wasson is the author of six previous books on Hollywood including the New York Times bestsellers Fifth Avenue, Five A.M.: Audrey Hepburn, Breakfast at Tiffany’s, and the Dawn of the Modern American Woman and The Big Goodbye: Chinatown and the Last Days of Hollywood, and Fosse, the basis for the limited series “Fosse/Verdon.” With Jeanine Basinger, he is co-author of Hollywood: The Oral History. He lives in Los Angeles.

“Hollywood's ultimate oral history…a hard book to put down. The special virtue of Basinger and Wasson’s work is its seamlessly sequential organization...With a net cast this wide, many glimmering fish are drawn up.”  — Adam Gopnik, The New Yorker

"This volume is a gold mine of production details, backroom deals, and inside gossip. There are surprising revelations—e.g., Joan Crawford was more beloved than her reputation for derangement would have one believe—and memorably graphic stories, as when Billy Wilder noted that during the filming of Greed (1924), Erich von Stroheim “stopped shooting for three days because there wasn’t enough horseshit in the streets” and forced staff to collect more for him “because that’s what he wanted. Plenty of good horseshit. . . . Fun firsthand accounts from 100 years of Hollywood history." — Kirkus Reviews

"This book is a movie buff’s dream (especially if you love gossip). Even if you think you know a lot about Hollywood and its leading players, I guarantee you’ll gain new insight from this book. It’s a perfect one to keep in mind when you need gifts for the cinephiles in your life this holiday season." — BuzzFeed News

"As close to a comprehensive Who’s Who of American film as we’re likely to see, and as close to a definitive history of American cinema as we’ve seen so far. An absolute must-read for industry pros and fans alike." — Booklist (starred review)

“Surely the most comprehensive portrait of America’s dream factory ever committed to paper.” — The Guardian (UK)

"Unparalleled in its scope and vision . . . Jeanine Basinger and Sam Wasson are two of our best chroniclers of Hollywood's past, but this collaboration marks their most ambitious work yet . . . . Offers a unique first-hand account of the industry's founding and ever-evolving approaches." — Entertainment Weekly

"The secrets of Tinseltown burn bright in this collection of interviews culled from the American Film Institute’s archives and assembled by film scholar Basinger and author Wasson . . . . The commentary crackles with humorous anecdotes and acerbic insights . . . . The result is a fascinating conversation about Hollywood’s magical blending of art and commerce." — Publishers Weekly (starred review)

“. . . an incredible look inside one of the world's most storied industries . . . honest, surprising, and delightful details about what life is like on and off camera.” — Town & Country

“….something fresh, revealing and frequently amusing on nearly every page….Hollywood will surely bring joy to any cinephile…” — Wall Street Journal

"Recommended for the large audience of popular culture enthusiasts for whom knowledge of the Hollywood past will enable them better to appreciate occurring and anticipated industry changes." — Library Journal (starred)

“There is something majestic about this book….A must-have for any fan of Hollywood history…Will remain a standard work of reference for many years to come….” — Los Angeles Review of Books

“…a delightful and illuminating account of moviemaking...” — Christian Science Monitor

“…a fat, showbiz-nerd-satisfying tome with something for every showbiz-nerd taste…. a trove of direct, un-self-conscious observations about the times and ways in which these pros worked….” — New York Times