This Place Is Still Beautiful (Hardcover) 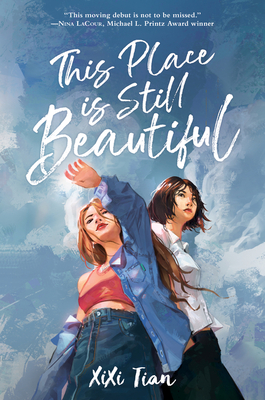 This Place Is Still Beautiful (Hardcover)

“This is one of the most phenomenal debuts I’ve ever read. After a hate crime is committed in their home, two very different Chinese American sisters have to deal with this incident without tearing their family apart. I was blown away by this story!”
— Joseline Diaz, Kepler's Books, Menlo Park, CA

A sweeping debut novel about first love, complicated family dynamics, and the pernicious legacy of racism. Perfect for fans of Tahereh Mafi, Jandy Nelson, and Emily X.R. Pan, with crossover appeal for readers of Brit Bennett’s The Vanishing Half and Celeste Ng’s Everything I Never Told You.

The Flanagan sisters are as different as they come. Seventeen-year-old Annalie is bubbly, sweet, and self-conscious, whereas nineteen-year-old Margaret is sharp and assertive. Margaret looks just like their mother, while Annalie passes for white and looks like the father who abandoned them years ago, leaving their Chinese immigrant mama to raise the girls alone in their small, predominantly white Midwestern town.

When their house is vandalized with a shocking racial slur, Margaret rushes home from her summer internship in New York City. She expects outrage. Instead, her sister and mother would rather move on. Especially once Margaret’s own investigation begins to make members of their community uncomfortable.

For Annalie, this was meant to be a summer of new possibilities, and she resents her sister’s sudden presence and insistence on drawing negative attention to their family. Meanwhile Margaret is infuriated with Annalie’s passive acceptance of what happened. For Margaret, the summer couldn’t possibly get worse, until she crosses paths with someone she swore she’d never see again: her first love, Rajiv Agarwal.

As the sisters navigate this unexpected summer, an explosive secret threatens to break apart their relationship, once and for all.

This Place Is Still Beautiful is a luminous, captivating story about identity, sisterhood, and how our hometowns are inextricably a part of who we are, even when we outgrow them.

XiXi Tian was born in China and immigrated to the United States when she was a year old. She grew up in central Illinois. She graduated from the University of Illinois at Urbana-Champaign with a degree in history and then attended Harvard Law School. She is a tech lawyer by day and a writer by night. She lives outside of New York City. You can visit her online at www.xixiwrites.com.

“As the sisters grapple with what it means to be mixed race and Asian American in a largely White Midwestern town, when to speak up, and whose expectations they should meet, they also struggle to navigate their relationship with each other. About much more than just racism toward Chinese Americans, this novel deftly tackles the precarious moments surrounding the end of high school and the beginning of college when romantic and familial relationships are complicated, changing, and all-consuming. Quiet yet powerful, complex, and grounded in the reality that nothing will ever be completely resolved.” — Kirkus Reviews (starred review)

“While Tian doesn’t shy away from dealing with large and small acts of racial prejudice, the story revolves around the two very different sisters: their personalities, their perceptions, and their evolving connections with each other, their mother, and their friends. An impressive first novel.” — ALA Booklist (starred review)

“Tian’s debut explores our vulnerabilities in the face of change and how we find redemption for our past mistakes." — Bulletin of the Center for Children’s Books (starred review)

“A radiant YA debut about biracial identity and the complexity of love for people and places. An incisive read.” — Shelf Awareness (starred review)

“Tender and lovely, This Place is Still Beautiful tells the story of a family forced to face their town—and each other—in the wake of a crime that can’t be ignored. XiXi Tian is an exciting new voice in YA, and this moving debut is not to be missed.” — Nina LaCour, Michael L. Printz Award Winner

“Tian excavates the awkward, ugly truths we avoid, and exposes them with raw emotional honesty and grace. This book made me feel seen in a way that very few books ever have. I found myself nodding and saying, 'Yes, that’s so true!' over and over again.” — Misa Sugiura, author of This Time Will Be Different