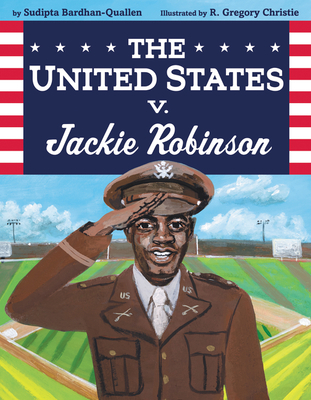 A moving and inspiring nonfiction picture book about Jackie Robinson’s court martial trial—an important lesser-known moment in his lifetime of fighting prejudice with strength and grace. Students who have been introduced to this American hero from such books as Brad Meltzer's I Am Jackie Robinson can take a deeper look at a key event in his life with The United States v. Jackie Robinson.

Jackie Robinson broke boundaries as the first African American player in Major League Baseball. But long before Jackie changed the world in a Dodger uniform, he did it in an army uniform.

As a soldier during World War II, Jackie experienced segregation every day—separate places for black soldiers to sit, to eat, and to live. When the army outlawed segregation on military posts and buses, things were supposed to change.

So when Jackie was ordered by a white bus driver to move to the back of a military bus, he refused. Instead of defending Jackie’s rights, the military police took him to trial. But Jackie would stand up for what was right, even when it was difficult to do.

This nonfiction picture book is a strong choice for sharing at home or in the classroom—as Booklist noted: "A story that will appeal to both baseball fans and those looking for an interesting way to highlight lesser-known aspects of the fight for civil rights.”

With an author's note, a timeline, bibliography, and more, this book offers helpful resources for readers, teachers, and librarians to find out more about Jackie Robinson and the history of civil rights in the US.

Sudipta Bardhan-Quallen is the author of numerous fiction and nonfiction books for children, including Pirate Princess, illustrated by Jill McElmurry; Hampire!, illustrated by Howard Fine; and Tightrope Poppy the High-Wire Pig, illustrated by Sarah Dillard. Sudipta lives in New Jersey with her family.

R. Gregory Christie is the Caldecott Honor-winning illustrator of Freedom in Congo Square, as well as a five-time recipient of the Coretta Scott King Honor Illustrator Award and a three-time recipient of the New York Times Ten Best Illustrated Children’s Books of the Year award. He’s also a recipient of the NAACP’s Image Award, the Boston Globe-Horn Book Award, and the American Library Association’s Theodor Seuss Geisel Award for illustration. He also illustrated the 2013 Kwanzaa stamp for the United States Postal Service. He lives in Georgia. Visit Gregory’s website at www.gas-art.com

“Powerfully illustrates that this groundbreaking American icon’s commitment to equality did not begin or end with baseball—his courage was a lifelong trait.” — Kirkus Reviews (starred review)

“It’s nice to have an athlete celebrated for personal integrity over physical prowess, and R. Gregory Christie’s pictures bolster this, evoking a Robinson who is strong and sure, but also smiling, warm, and ultimately, triumphant.” — New York Times Book Review

“A story that will appeal to both baseball fans and those looking for an interesting way to highlight lesser-known aspects of the fight for civil rights.” — Booklist

Praise for SNORING BEAUTY: “Fun for reading aloud, and children will be happy to help with the multiple snoring sounds.” — Booklist

Praise for HAMPIRE!: “Building suspense and a sense of nocturnal dread, Bardhan-Quallen’s (The Hog Prince) rhymes are filled with puns (’”We’re sitting ducks,” the duck announced’), and the antics of the frantic duck and the animals he rouses should have readers laughing.” — Publishers Weekly

“Kids will feast on this deliciously scary tale over and over.” — Kirkus Reviews

“Fine’s paintings exaggerate the animals’ terror to comic effect (funniest is the pony cowering in the corner), and his canted angles give this just the right absurdist tone.” — ALA Booklist