The Amur River: Between Russia and China (Paperback) 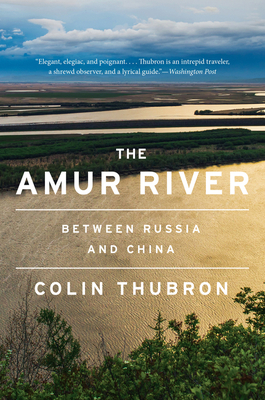 The Amur River: Between Russia and China (Paperback)

"Elegant, elegiac and poignant...Thubron is an intrepid traveler, a shrewd observer and a lyrical guide... to the river, much of it along the border between these two powers at a time of rapid and tense reconfiguration of global geopolitics." (Washington Post)

The most admired travel writer of our time—author of Shadow of the Silk Road and To a Mountain in Tibet—recounts an eye-opening, often perilous journey along a little known Far East Asian river that for over a thousand miles forms the highly contested border between Russia and China.

The Amur River is almost unknown. Yet it is the tenth longest river in the world, rising in the Mongolian mountains and flowing through Siberia to the Pacific. For 1,100 miles it forms the tense border between Russia and China. Simmering with the memory of land-grabs and unequal treaties, this is the most densely fortified frontier on earth.

In his eightieth year, Colin Thubron takes a dramatic journey from the Amur’s secret source to its giant mouth, covering almost 3,000 miles. Harassed by injury and by arrest from the local police, he makes his way along both the Russian and Chinese shores, starting out by Mongolian horse, then hitchhiking, sailing on poacher’s sloops or travelling the Trans-Siberian Express. Having revived his Russian and Mandarin, he talks to everyone he meets, from Chinese traders to Russian fishermen, from monks to indigenous peoples. By the time he reaches the river’s desolate end, where Russia’s nineteenth-century imperial dream petered out, a whole, pivotal world has come alive.

The Amur River is a shining masterpiece by the acknowledged laureate of travel writing, an urgent lesson in history and the culmination of an astonishing career.

Colin Thubron is an acclaimed travel writer and novelist. His first books were about the Middle East – Damascus, Lebanon and Cyprus. In 1982 he travelled by car into the Soviet Union, a journey he described in Among the Russians. From these early experiences developed his classic travel books: Behind the Wall: A Journey through China (winner of the Hawthornden Prize and the Thomas Cook Travel Award), The Lost Heart of Asia, In Siberia (Prix Bouvier), Shadow of the Silk Road and To a Mountain in Tibet.

"Elegant, elegiac and poignant...Thubron is an intrepid traveler, a shrewd observer and a lyrical guide... to the river, much of it along the border between these two powers at a time of rapid and tense reconfiguration of global geopolitics." — Washington Post

“When a river runs through a good book, a current of expectations irresistibly carries readers along…On this subarctic odyssey, each bend of the Amur brings new sights, new characters, and new revelations… For over a thousand miles, the Amur marks the boundary between two nations, and it is there, crisscrossing the border, that Thubron sees the contrast between an empire in decline and one on the rise.”   — Natural History Magazine

“A breathtaking account of the beauty and harshness of the 1,100-mile-long Amur River that forms the border between Russia and China. . . . Thubron documents the interplay of politics and history, contrasting the “subdued fatalism” of Russians living in the river basin with the bustling optimism of the Chinese, whose glitzy restaurants and markets mask signs of discontent. . . . A top-notch travelogue.”      — Publishers Weekly (Starred Review)

“Enthralling… A captivating portrait of a remote region of the world… evoking with beautiful detail and compassion its rich history and culture." — Kirkus (Starred Review)

“The Amur River shows Thubron to be at the peak of his powers… as one of our greatest prose writers in any genre. But The Amur River is not just beautifully written: it is also a work of great importance…Thubron uses the Amur River as a metaphor to deal with the relationship of two countries now regarded by many as the greatest threat to the West in these dying days of the U.S. Imperium.” — Daily Telegraph

"A journey from a sacred Mongolian source down a river that is also a fault line of history, where empires divide and rivalries begin...The most eloquent travel writer in Britain...found a psychic salve in the Amur, whose rugged beauty enchants him even as its history fills him with dread." — Wall Street Journal

"A mesmerizing trip down Far East Asia's most consequential river reveals the twists and turns of history and politics...It is the troubling tension between Russia and China that lies at the heart of Thubron's book...A poignant contribution to Thubron's acclaimed career, with his trademark lyricism elevating nature to a central breathing character that often reflects the ambivalence of its human counterparts." — BookBrowse.com

"An extraordinary journey...People are characterized with great sympathy...Thubron writes brilliantly about the region's wildlife and folklore...Moments of humour leaven the atmosphere...One can only marvel that Thubron completed his journey and be thankful that this marvelous book came out of it." — Times Literary Supplement (London)

“Unlike such peers as the Mississippi and the Nile, the Amur is a source of division, with anxiety and distrust seething on both banks….Veteran travel writer Colin Thubron weaves in historical anecdotes, such as the freedom Chekhov felt while sailing down the river to interview convicts in Sakhalin, and his stopover with a Japanese prostitute in Blagoveschensk." — The New Yorker