Trust the Plan: The Rise of QAnon and the Conspiracy That Unhinged America (Hardcover) 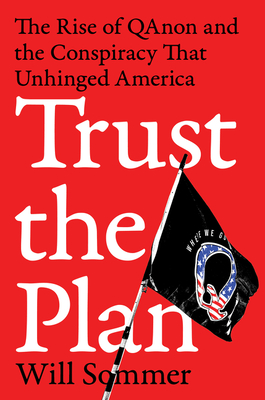 Trust the Plan: The Rise of QAnon and the Conspiracy That Unhinged America (Hardcover)

"A story so bizarre, only Will Sommer could report it.” —Molly Jong-Fast

The definitive book on QAnon from the reporter knows them best; Will Sommer explains what it is, how it has gained a mainstream following among Republican lawmakers and ordinary citizens, the threat it poses to democracy, and how we can reach those who have embraced the conspiracy and are disseminating its lies.

The Storm is Coming. Trust the Plan. WWG1WGA. You’ve seen the letter Q on TV and in the news – it’s been everywhere from Trump rallies to the January 6th insurrection. “QAnon” used to sound vaguely familiar, somewhat ominous, but not quite mainstream. But what was once a fringe conspiracy theory has now become a household name and its symbols recognizable around the world. How did this happen, who is actually involved, what do they believe, and what do they want?

Daily Beast reporter Will Sommer has been on the ground with Q’s followers since day one, and in Trust the Plan Sommer has written the definitive book on the movement—who started it and who grew it, what they really believe is going on, and what they want to see “the Storm” accomplish on the day of its reckoning. At once a character study and a journalistic exposé, Sommer lets his cast of characters do the talking as he visits them around the world, from their makeshift compounds to the rallies they are still holding.

The great tragedy of this story is ultimately the legitimization of this ideology by mainstream politicians eager to gain access to a large and growing cohort of voters. Though 2020 brought the end of Trump’s presidency, his following within the QAnon community has simply pivoted and grown stronger. Trust the Plan shows us in granular detail who we’ll be up against for years to come, in the US and abroad. Understanding why and how something like Q happens is an indispensable exercise, and in showing us how we got here we can chart a path out.

Will Sommer is a politics reporter for the Daily Beast and the cohost of the podcast Fever Dreams. He previously worked as a campaign editor at The Hill and as a political columnist for Washington City Paper. His work covering QAnon and other conspiracy theories has been featured in multiple documentaries, including HBO’s Q: Into the Storm.

“Will Sommer all but invented serious cultural reporting on the far right, inhabiting the worst corners of the internet so that the rest of us could understand them, and his new book on QAnon serves as a vital road map to one of the strangest and most disturbing movements of modern politics. Writing with insight, empathy, and historical expertise, Will masterfully documents how a random anonymous internet post on Reddit in 2017 rose up and swallowed the Republican Party.” — Garrett Graff, author of Watergate: A New History

“Will Sommer has established himself as the expert on America’s right-wing fringe. Now he’s exploring the damage that Donald Trump and the QAnon theorists who adore him have wreaked on the country. With kidnappings, murders, and Satanic rituals, this is a story so bizarre, only Will Sommer could report it.” — Molly Jong-Fast, contributing writer, the Atlantic

"This is an absolutely fascinating and deeply troubling book. Rage-inducing and heartbreaking, it’s a rigorously researched, energetically written examination of a phenomenon laughed off for too long as fringe silliness." — Booklist (starred review)