Chaos Theory: Finding Meaning in the Madness, One Bad Decision at a Time (Hardcover) 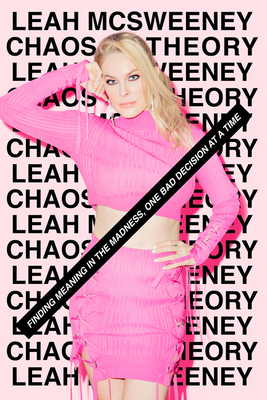 Chaos Theory: Finding Meaning in the Madness, One Bad Decision at a Time (Hardcover)

The Real Housewives of New York City star, fashion-industry pioneer, entrepreneur, and mom Leah McSweeney breaks through the chaos of battling addiction, igniting the streetwear world, and disrupting reality television—all while being unapologetically, unrelentingly herself.

If there’s one thing Leah McSweeney knows for sure, it’s that life never quite gives you what you expect. Her road to success as an entrepreneur and Real Housewives breakout star has been paved with unexpected chances, soul-crushing challenges, and, for too long, chaos.

Now Leah shares her unique philosophy of Chaos Theory and how key moments in our lives can lead us to paths we never imagined. With unparalleled grit, resilience, and a take-no-prisoners attitude, Leah shares her story of finding her way by pushing back against the conventions of society, against the status quo of the fashion industry, and against the limitations of her own self-worth to create a wild, unconventional, and beautiful life.

From her years spent partying in the drug-fueled New York City club scene to getting sober, having a baby, and investing the settlement money from an NYPD assault to launch her business--Leah has learned to throw a punch and keep her fists up. In Chaos Theory, her raw, candid storytelling offers inspiration and insight for embracing life’s unexpected turns and finding meaning in the chaos.

LEAH MCSWEENEY is a streetwear pioneer, entrepreneur, cultural provocateur, and founder of Married to the Mob, one of the first streetwear brands for women, by women. Since launching in 2004, she has brokered exclusive partnerships with MCM, Kangol, Barbie, Paris’s Colette, Reebok, and Nike. Following the incredible success of Married to the Mob, in 2020 Leah launched Happy Place, a luxury sleepwear line. She is a frequent contributor to Penthouse magazine, Hypebae, and Mass Appeal. She joined The Real Housewives of New York City in 2019 and continues to advocate for female empowerment, street culture, and creative entrepreneurship both on- and off-screen. Leah lives in New York City with her fourteen-year-old daughter, Kier.

"Leah McSweeney is a woman who is impossible to define, radiating wit, light, a sharp tongue, and wicked ways and looks. Chaos Theory is an absolute must-read for anyone searching for truth; Mcsweeney paves the way to enlightenment via the hot tar streets of New York." — Kelly Cutrone, New York Times bestselling author of If You Have to Cry, Go Outside and Founder and CEO of People’s Revolution

“Leah McSweeney is more than a housewife: she’s a force of nature. This book is fearless and fascinating. I couldn’t put it down.” — Cat Marnell, New York Times bestselling author of How to Murder Your Life

“Alternately horrifying and hilarious, Leah McSweeney’s lively memoir is the scorchingly honest confession of a self-described “chaos junkie”. Prankster, adventuress, and goader of nuns, Leah brings her breezy street vibe to the stuffy salons of the uptown and Hamptons elite in Real Housewives of New York.” — Camille Paglia, academic and author of Sexual Personae, Provocations, and many others