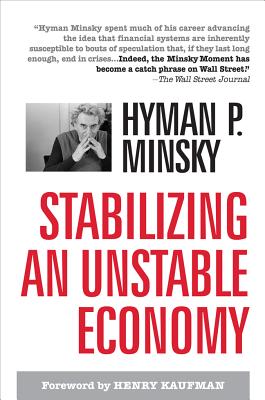 In his seminal work, Minsky presents his groundbreaking financial theory of investment, one that is startlingly relevant today. He explains why the American economy has experienced periods of debilitating inflation, rising unemployment, and marked slowdowns-and why the economy is now undergoing a credit crisis that he foresaw. Stabilizing an Unstable Economy covers:

Henry Kaufman, president, Henry Kaufman & Company, Inc., places Minsky's prescient ideas in the context of today's financial markets and institutions in a fascinating new preface. Two of Minsky's colleagues, Dimitri B. Papadimitriou, Ph.D. and president, The Levy Economics Institute of Bard College, and L. Randall Wray, Ph.D. and a senior scholar at the Institute, also weigh in on Minsky's present relevance in today's economic scene in a new introduction.

A surge of interest in and respect for Hyman Minsky's ideas pervades Wall Street, as top economic thinkers and financial writers have started using the phrase "Minsky moment" to describe America's turbulent economy. There has never been a more appropriate time to read this classic of economic theory.

Hyman P. Minsky, Ph.D., was an American economist who studied under Joseph Schumpeter and Wassily Leontief. He taught economics at Washington University, University of California--Berkeley, Brown University, and Harvard University. Minsky joined the Jerome Levy Economics Institute of Bard College as a distinguished scholar in 1990, where he continued his research and writing until a few months before his death in October, 1996. His two seminal books were Stabilizing an Unstable Economy and John Maynard Keynes.