Children of the Flames: Dr. Josef Mengele and the Untold Story of the Twins of Auschwitz (Paperback) 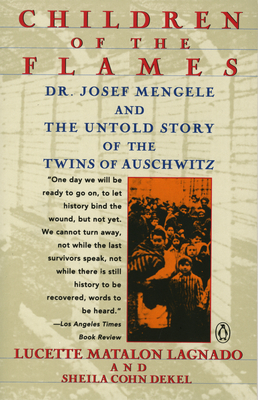 Children of the Flames: Dr. Josef Mengele and the Untold Story of the Twins of Auschwitz (Paperback)


Backordered
During World War II, Nazi doctor Josef Mengele subjected some 3,000 twins to medical experiments of unspeakable horror; only 160 survived. In this remarkable narrative, the life of Auschwitz's Angel of Death is told in counterpoint to the lives of the survivors, who until now have kept silent about their heinous death-camp ordeals.
Lucette Matalon Lagnado was born in Cairo, Egypt. She is the 2008 recipient of the $100,000 Sami Rohr Prize for Jewish Literature, the largest cash award in the Jewish book world. As an investigative reporter for the Wall Street Journal, she has covered health care for a decade. She has been a finalist or received prizes from, among others, Columbia Journalism School, the University of Missouri, and the University of Southern California.

Sheila Cohn Dekel is the widow of Alex Dekel, an Auschwitz survivor.