An Exaltation of Larks: The Ultimate Edition (Paperback) 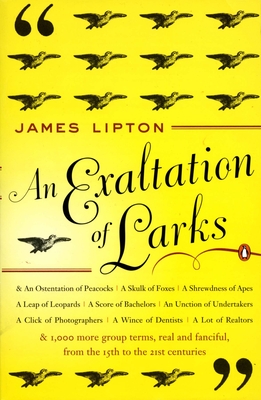 An Exaltation of Larks: The Ultimate Edition (Paperback)


Not On Our Shelves—Ships in 1-5 Days
A delightfully unexpected, lovingly curated ode to the unique collective nouns that adorn our language, from “a leap of leopards” to “a murder of crows” and beyond, from the inimitable voice behind Inside the Actors Studio

“I am madly in love with collective nouns! They make language so colorful and ticklish. . . . [An Exaltation of Larks] possess[es] an embarrassment of riches (wink wink!).” —Lupita Nyong’o, The New York Times

For those who have wondered if the familiar “pride of lions” and “gaggle of geese” were merely the tip of a linguistic iceberg, James Lipton has provided a definitive answer: here are hundreds of equally pithy, often poetic terms he has unearthed and collected into one exhaustive volume. Over years of painstaking research, he embarked on an odyssey that has given us a “slouch of models,” a “shrivel of critics,” an “unction of undertakers,” a “blur of Impressionists,” a “score of bachelors,” a “pocket of quarterbacks,” and many more.

Witty, beautiful, and remarkably apt, An Exaltation of Larks is a brilliant compendium of more than 1,100 resurrected or newly minted contributions to that ever-evolving species, the English language.
James Lipton was the creator, executive producer, writer, and host of Inside the Actors Studio, which has been seen in eighty-nine million homes in America and in 125 countries and has received fourteen Emmy nominations. He was the author of the novel Mirrors, which he then adapted and produced for the screen, and of the American literary perennial An Exaltation of Larks, and has written the book and lyrics of two Broadway musicals. He was a vice president of the Actors Studio and the founder and dean emeritus of the Actors Studio Drama School at Pace University, he received three honorary PhDs, France’s Chevalier de l’Ordre des Arts et des Lettres, and has been awarded the Lifetime Achievement Emmy by the National Academy of Television Arts and Sciences.
“I am madly in love with collective nouns! They make language so colorful and ticklish. . . . [An Exaltation of Larks] possess[es] an embarrassment of riches (wink wink!).”
—Lupita Nyong’o, The New York Times

“James Lipton has performed all speakers of English a great service. If there were an English Academy, he would surely deserve election.”
—Raymond Sokolov, Newsweek

“A great, great gift book . . . that you will end up keeping for yourself.”
—Neil Simon

“A clap of hands, a chorus of approval, a hint of envy.”
—Larry Gelbart