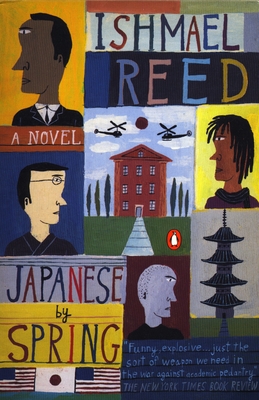 
Backordered
Benjamin "Chappie" Puttbutt, a black juior professor at the overwhelmingly white Jack London College, lusts after tenure and its glorious perks (including a house in the Oakland Hills). He spends most of his time trying to divine the ideological climate of the school and obligingly adapting his beliefs to it. When Puttbutt's mysterious Japanese tutor, who promises to teach him Japanese by spring, suddenly becomes the school's new president and appoints Puttbutt as academic dean, the fun really begins—for Puttbutt sets out to stir things up and settle old scores.

Turning every contemporary political and social movement on its head—from feminism to nationalism to jingoism—this boistrois and irreverent novel manages to be by turns hilarious and totally serious.

"One of the funniest satires of university politics I've ever read. Ishmael Reed is funnier than Norman Mailer or Gore Vidal." —Leslie Marmon Silko

"Reed is, as always, an American original; a wiseguy whose wisdom is the real thing," —The Boston Sunday Globe

Ishmael Reed is one of America's most renowned African-American writers. He is the author of plays, poetry and novels, including Japanese by Spring. He lives in Oakland, California.