The First Poems in English (Paperback) 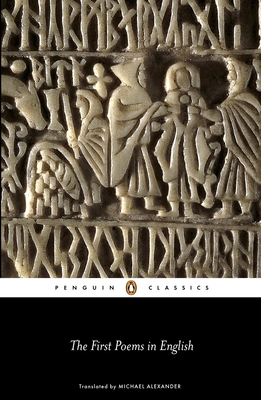 The First Poems in English (Paperback)


Special Order—Subject to Availability
A collection of the finest and earliest poems composed in English, from tales of battle to love songs

This selection of the earliest poems in English comprises works from an age in which verse was not written down, but recited aloud and remembered. Heroic poems celebrate courage, loyalty and strength, in excerpts from Beowulf and in The Battle of Brunanburgh, depicting King Athelstan’s defeat of his northern enemies in 937 AD, while The Wanderer and The Seafarer reflect on exile, loss and destiny. The Gnomic Verses are proverbs on the natural order of life, and the Exeter Riddles are witty linguistic puzzles. Love elegies include emotional speeches from an abandoned wife and separated lovers, and devotional poems include a vision of Christ’s cross in The Dream of the Rood, and Caedmon’s Hymn, perhaps the oldest poem in English, speaking in praise of God.

For more than seventy years, Penguin has been the leading publisher of classic literature in the English-speaking world. With more than 1,700 titles, Penguin Classics represents a global bookshelf of the best works throughout history and across genres and disciplines. Readers trust the series to provide authoritative texts enhanced by introductions and notes by distinguished scholars and contemporary authors, as well as up-to-date translations by award-winning translators.
Michael Alexander is Professor of English at the University of St Andrews, and translator/editor of Beowulf: A Verse Translation and Beowulf: A Glossed Text, Chaucer's The Canterbury Tales: The First Fragment and The Earliest English Poems.