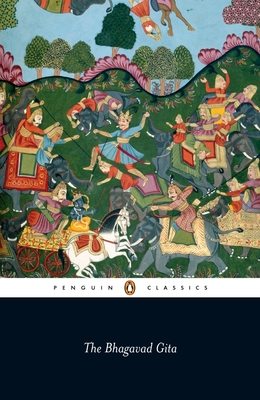 
On Our Shelves Now at:
The Bhagavad Gita is an early epic poem that recounts the conversation between Arjuna the warrior and his charioteer Krishna, the manifestation of God. In the moments before a great battle, the dialogue sets out the important lessons Arjuna must learn to change the outcome of the war he is to fight, and culminates in Krishna revealing to the warrior his true cosmic form, counselling him to search for the universal perfection of life. Ranging from instructions on yoga postures to dense moral discussion, the Gita is one of the most important Hindu texts, as well as serving as a practical guide to living well.

For more than seventy years, Penguin has been the leading publisher of classic literature in the English-speaking world. With more than 1,700 titles, Penguin Classics represents a global bookshelf of the best works throughout history and across genres and disciplines. Readers trust the series to provide authoritative texts enhanced by introductions and notes by distinguished scholars and contemporary authors, as well as up-to-date translations by award-winning translators.
Laurie L. Patton is Winship Distinguished Research Professor and Chairperson (1996). She earned her B.A. from Harvard University and her Ph.D. from the University of Chicago. For several years during the last two decades she has made her Indian home in Pune, Maharashtra. Her scholarly interests are in the interpretation of early Indian ritual and narrative, comparative mythology, literary theory in the study of religion, and women and Hinduism in contemporary India.