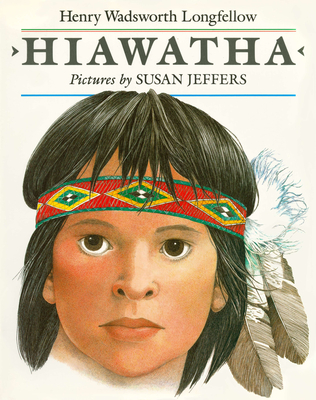 Rich in imagery and detail, this exquisitely rendered picture book introduces readers to one of America's favorite classic poems, "The Song of Hiawatha" by Henry Wadsworth Longfellow. Illustrated by Susan Jeffers, the Caldecott-Honor winning author of Three Jovial Huntsmen, A Mother Goose Rhyme, this book beautifully weaves together oral traditions of American Indian culture and presents a charming and hypnotic account of Hiawatha’s boyhood.

“Exquisite, detailed illustrations grace this picture book which presents the part of Longfellow's stirring poem dealing with Hiawatha's boyhood and his relationship to his grandmother, who teaches him about the ways of animals and the forces of nature. The illustrator's careful research on flora and fauna and woodland Indian culture is evident. Some of the poem's background is explained in a note at the beginning. This is truly a picture book for all ages.”—Children's Literature (emphasis added)
Henry Wadsworth Longfellow (1807-1882) was the most popular and admired American poet of the nineteenth century. Born in Portland, Maine, and educated at Bowdoin College, Longfellow’s ambition was always to become a writer; but until mid-life his first profession was the teaching rather than the production of literature, at his alma mater (1829-35) and then at Harvard (1836-54). His teaching career was punctuated by two extended study-tours of Europe, during which Longfellow made himself fluent in all the major Romance and Germanic languages. Thanks to a fortunate marriage and the growing popularity of his work, from his mid-thirties onwards Longfellow, ensconced in a comfortable Cambridge mansion, was able to devote an increasingly large fraction of his energies to the long narrative historical and mythic poems that made him a household word, especially Evangeline (1847), The Song of Hiawatha (1855), The Courtship of Miles Standish (1858), and Tales of a Wayside Inn (1863, 1872, 1873). Versatile as well as prolific, Longfellow also won fame as a writer of short ballads and lyrics, and experimented in the essay, the short story, the novel, and the verse drama. Taken as a whole, Longfellow’s writings show a breadth of literary learning, an understanding of western languages and cultures, unmatched by any American writer of his time.

Susan Jeffers is the illustrator of such distinguished picture books as Three Jovial Huntsmen, a Caldecott Honor book; Rachel Field's Hitty; and the ABBY Award-winning Brother Eagle, Sister Sky, which was also a New York Times besteller. She lives in New York.