On the Genealogy of Morals (Paperback) 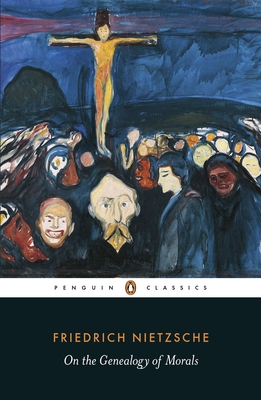 On the Genealogy of Morals (Paperback)


On Our Shelves Now at:
For the first time in Penguin Classics: Nietzsche’s accessible exploration of key ideas in his landmark Beyond Good and Evil—in a lucid new translation

Friedrich Nietzsche claimed that the purpose of On the Genealogy of Morals was to call attention to his previous writings. But in fact the book does much more than that, elucidating and expanding on the cryptic aphorisms of Beyond Good and Evil, and presenting a coherent discussion of morality in a work that is more accessible than much of his previous writings.

For more than sixty-five years, Penguin has been the leading publisher of classic literature in the English-speaking world. With more than 1,500 titles, Penguin Classics represents a global bookshelf of the best works throughout history and across genres and disciplines. Readers trust the series to provide authoritative texts enhanced by introductions and notes by distinguished scholars and contemporary authors, as well as up-to-date translations by award-winning translators.
Friedrich Nietzsche (1844–1900) was a philosopher, critic, composer, and poet whose works include Thus Spoke Zarathustra, Beyond Good and Evil, Twilight of the Idols, The Antichrist, and his autobiography, Ecce Homo.

Michael A. Scarpitti is an independent scholar of philosophy.

Robert C. Holub is a professor of German at Ohio State University.