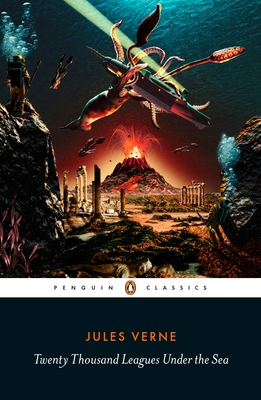 
Not On Our Shelves—Ships in 1-5 Days
Verne’s timeless underwater adventure story, now available in a new translation as a Penguin Classics black spine.

In this thrilling adventure tale by the father of science fiction, three men embark on an epic journey under the sea with the mysterious Captain Nemo aboard his submarine, the Nautilus. Over the course of their fantastical voyage, they encounter the lost city of Atlantis, the South Pole, and the corals of the Red Sea. Along the way, they must battle countless adversaries both human and monstrous. This triumphant work of the imagination shows the limitless possibilities of science and the dark depths of the human mind.

For more than seventy years, Penguin has been the leading publisher of classic literature in the English-speaking world. With more than 1,800 titles, Penguin Classics represents a global bookshelf of the best works throughout history and across genres and disciplines. Readers trust the series to provide authoritative texts enhanced by introductions and notes by distinguished scholars and contemporary authors, as well as up-to-date translations by award-winning translators.
Jules Gabriel Verne (1828–1905) was a French author and a pioneer of the science-fiction genre. His novels include Journey to the Centre of the Earth (1864), Twenty Thousand Leagues Under the Sea (1869–70), and Around the World in Eighty Days (1873).

David Coward (translator) is emeritus professor of French at the University of Leeds. He has translated numerous French classics, including Molière’s plays, Simenon’s novels, and Albert Cohen’s Belle du Seigneur, for which he was awarded the Scott-Moncrieff prize in 1996.