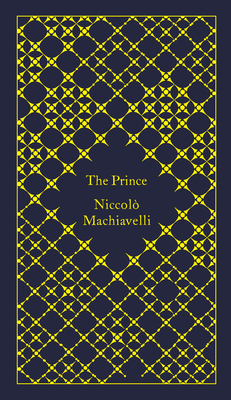 World-changing ideas meet eye-catching design: the best titles of the extraordinarily successful Great Ideas series are now packaged in Coralie Bickford-Smith’s distinctive, award-winning covers. Whether on a well-curated shelf or in your back pocket, these timeless works of philosophical, political, and psychological thought are absolute must-haves for book collectors as well as design enthusiasts.

As a diplomat in turbulent fifteenth-century Florence, Niccolò Machiavelli knew how quickly political fortunes could rise and fall. The Prince, his tough-minded, pragmatic handbook on how power really works, made his name notorious and has remained controversial ever since. How can a leader be strong and decisive, yet still inspire loyalty in his followers? When is it necessary to break the rules? Is it better to be feared than loved? Examining regimes and their rulers the world over and throughout history, from Roman Emperors to renaissance Popes, from Hannibal to Cesare di Borgia, Machievalli answers all these questions in a work of realpolitik that still has shrewd political lessons for modern times. Tim Parks's acclaimed contemporary translation renders Machiavelli's pointed original  into language that feels as alarming and enlightening as when it was first written. His introduction discusses Machiavelli's life and reputation, and explores the historical background to the work.

For more than sixty-five years, Penguin has been the leading publisher of classic literature in the English-speaking world. With more than 1,500 titles, Penguin Classics represents a global bookshelf of the best works throughout history and across genres and disciplines. Readers trust the series to provide authoritative texts enhanced by introductions and notes by distinguished scholars and contemporary authors, as well as up-to-date translations by award-winning translators.
Niccolò Machiavelli (1469-1527) was a Florentine statesman who was later forced out of public life. He then devoted himself to studying and writing political philosophy, history, fiction, and drama.

Tim Parks was born in 1954, studied at Cambridge and Harvard, and moved to Italy in 1980. His translations from the Italian include works by Alberto Moravia, Italo Calvino and Roberto Calasso He has written a number of novels, including the Booker-shortlisted Europa, and his account of provincial life in Italy, Italian Neighbours, was an international bestseller.
“[Machiavelli] can still engage our attention with remarkable immediacy, and this cannot be explained solely by the appeal of his ironic observations on human behaviour. Perhaps the most important thing is the way he can compel us to reflect on our own priorities and the reasoning behind them; it is this intrusion into our own defenses that makes reading him an intriguing experience. As a scientific exponent of the political art Machiavelli may have had few followers; it is as a provocative rhetorician that he has had his real impact on history.” –from the Introduction by Dominic Baker-Smith