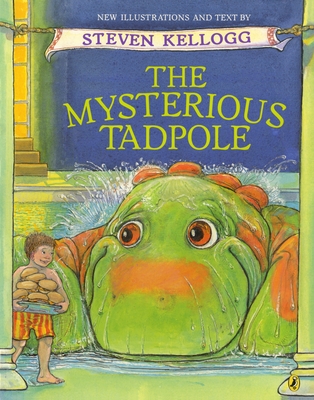 
Backordered
It's Louis's birthday and Uncle McAllister has brought him a very special gift&150a tadpole all the way from Scotland! Louis can hardly wait for Alphonse to grow into a frog. But it soon becomes clear that Alphonse is not turning into any ordinary frog. First Alphonse outgrows his jar, then the sink, and then the bathtub! This new edition of The Mysterious Tadpole boasts reimagined story twists and entirely new illustrations. The lovable giant of a tadpole has grown into something even more wonderful!
Steven Kellogg is a beloved author and illustrator who has published more than 100 picture books, including the classics The Mysterious Tadpole, Can I Keep Him?, The Island of the Skog, and Is Your Mama a Llama?, and Pinkerton, Behave!, which was on Horn Book's and Booklist’s Best of the Year lists and led to four sequels. Kellogg is a winner of the Regina Medal for his lifetime contribution to children’s literature. His books have received numerous accolades, such as being named Reading Rainbow featured selections and winning the Boston Globe-Horn Book Award, the Irma Simonton Black Award, the IRA-CBC Children’s Choice Award, and the Parents’ Choice Award.