Amber Brown Is Not a Crayon (Paperback) 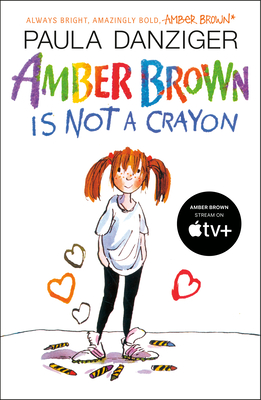 Amber Brown Is Not a Crayon (Paperback)

This is book number 1 in the Amber Brown series.

Amber Brown and Justin Daniels are best friends. They've known each other for practically forever, sit next to each other in class, help each other with homework, and always stick up for each other. Justin never says things like, "Amber Brown is not a crayon." Amber never says, "You're Justin Time." They're a great team—until disaster strikes. Justin has to move away, and now the best friends are fighting. Will they be able to work it out before it's too late?

Along with the ups and downs of shared custody, the Amber Brown chapter books are beloved for tackling relatable dilemmas with thoughtfulness, humor, and plenty of puns.
Born in Washington, D.C., and raised in New York, Paula Danziger knew since second grade that she wanted to be a writer. Beginning her career as a teacher, Danziger taught at the junior high, high school, college levels. She received her Masters Degree in reading and during that time she wrote her first bestselling novel, The Cat Ate My Gymsuit. She returned to teaching, but the success of her book encouraged her to become a full-time writer. It was non-stop for Danziger since then. Among her titles are: the enormously popular Amber Brown books as well as Remember Me To Harold Square, The Divorce Express, and Can You Sue Your Parents For Malpractice?

Known as a flamboyantly funny and deeply honest writer and speaker, Paula Danziger knew how to relate to young readers at their level. She was vital, funny, and compassionate. She knew how kids felt, what made them laugh, what they wore, collected, read, and played with. From collecting novelty toys that would make any teacher cringe, to wearing jangly earrings, funky glasses and shoes covered with beads and sequins, Paula Danziger had a direct line into kids' hearts and funnybones. She will be missed always.


In Paula's memory, The Amber Brown Fund has been established to bring authors and illustrators to schools and libraries which otherwise could not afford them. Donations may be sent to The Amber Brown Fund/ SCBWI Museum of Children’s Books, 8271 Beverly Blvd., Los Angeles, CA 90048.
Tony Ross lives in London, England.

"Danziger reaches out to a younger audience in this funny, touching slice of third-grade live, told in the voice of a feisty, lovable heroine." —School Library Journal, starred review

“Danziger [has] a pitch-perfect view of a child’s emotions.” —Kirkus Reviews, starred review

"Without a trace of condescension, Danziger gets the child's funny and vulnerable voice. The third-grader's friendship is beautifully drawn, especially the rituals about food, their shared enjoyment of the messy and the gross." —Booklist