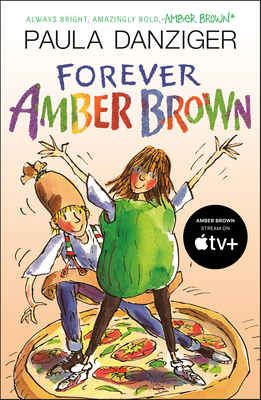 This is book number 5 in the Amber Brown series.

Amber's life has been full of changes lately. First her best friend Justin moved and she became best friends with Brandi. Then she had to deal with her parents' divorce and her dad's move to France. She's even getting used to her mom's boyfriend, Max.

Now the only change that she wants is to redo her bedroom. But then Max asks Amber's mom to marry him.

If she says yes, they might have to move. But if she says no, then Max may leave. Amber's mom is confused—and so is Amber! Can?t things just stay the same for once?
Born in Washington, D.C., and raised in New York, Paula Danziger knew since second grade that she wanted to be a writer. Beginning her career as a teacher, Danziger taught at the junior high, high school, college levels. She received her Masters Degree in reading and during that time she wrote her first bestselling novel, The Cat Ate My Gymsuit. She returned to teaching, but the success of her book encouraged her to become a full-time writer. It was non-stop for Danziger since then. Among her titles are: the enormously popular Amber Brown books as well as Remember Me To Harold Square, The Divorce Express, and Can You Sue Your Parents For Malpractice?

Known as a flamboyantly funny and deeply honest writer and speaker, Paula Danziger knew how to relate to young readers at their level. She was vital, funny, and compassionate. She knew how kids felt, what made them laugh, what they wore, collected, read, and played with. From collecting novelty toys that would make any teacher cringe, to wearing jangly earrings, funky glasses and shoes covered with beads and sequins, Paula Danziger had a direct line into kids' hearts and funnybones. She will be missed always.


In Paula's memory, The Amber Brown Fund has been established to bring authors and illustrators to schools and libraries which otherwise could not afford them. Donations may be sent to The Amber Brown Fund/ SCBWI Museum of Children’s Books, 8271 Beverly Blvd., Los Angeles, CA 90048.