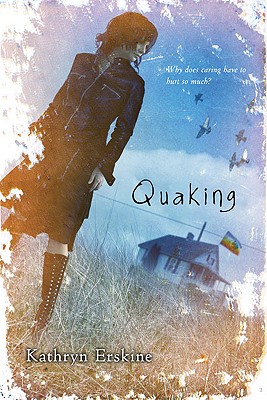 
Special Order—Subject to Availability
Goth girl Matt lives her life by simple rules: Stay under the radar, never go by Matilda (only Matt), and don't let anyone get too close. But everything changes when she moves in with a peaceful Quaker family in Pennsylvania. As the country fights a war in the Middle East, Matt fights her own personal war, battling bullies of her past and present and fighting to stand up for her belief in peace. Then violence erupts in town, and Matt finds that she will need to fight even harder to save the family she is starting to love.
Kathryn Erskine spent many years as a lawyer before realizing that she’d rather write things that people might actually enjoy reading. She grew up mostly overseas and attended eight different schools, her favorite being the Hogwarts-type castle in Scotland. The faculty, of course, did not consist of wizards, although . . . how did the headmistress know that it was “the wee redhead” who led the campaign to free the mice from the biology lab? Erskine draws on her childhood—and her second childhood through her children—for her stories. She still loves to travel but nowadays most trips tend to be local, such as basketball and tennis courts, occasional emergency room visits, and the natural food store for very healthy organic chocolate with “life saving” flavonoids.