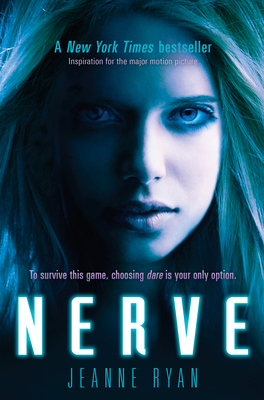 When Vee is picked to be a player in NERVE, an anonymous game of dares broadcast live online, she discovers that the game knows her. They tempt her with prizes taken from her ThisIsMe page and team her up with the perfect boy, sizzling-hot Ian. At first it's exhilarating--Vee and Ian's fans cheer them on to riskier dares with higher stakes. But the game takes a twisted turn when they're directed to a secret location with five other players for the Grand Prize round. Suddenly they're playing all or nothing, with their lives on the line. Just how far will Vee go before she loses NERVE.
Jeanne Ryan lives in Seattle, Washington.
Praise for NERVE by Jeanne Ryan

“Ryan’s story is thought-provoking and unsettling…the ending goes off with a bang and a twist.” Publishers Weekly

"Ryan questions the nature of entertainment and explores the concept of privacy in a world of increasingly sophisticated social media. Teens will find themselves drawn in by the story's possibilities, and unNERVEd by its outcome. Give this to Suzanne Collins's Hunger Games fans (Scholastic, 2008)." -School Library Journal

"The commentary on today's life-as-public-spectacle society is sound. The pacing is relentless, and readers will find themselves flipping madly to the very last page." -Kirkus Reviews

"Readers will remain tightly keyed into questions about what is going to happen." -Booklist

"An original, page-turning novel that offers a slice of pop culture that gives a whole new meaning to the trendy, reality-television genre." -VOYA