The Eye of the Falcon (Gods and Warriors #3) (Paperback) 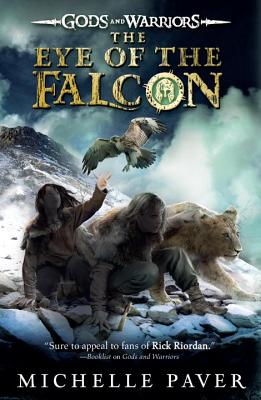 The Eye of the Falcon (Gods and Warriors #3) (Paperback)

This is book number 3 in the Gods and Warriors series.

The eruption of the volcano has shrouded the sun in ash, and the harsh winter is never-ending. With no trace of his lost sister to be found, Hylas takes ship for Keftiu, to find Pirra and free her from captivity.

But the Crows are also coming to Keftiu, led by the power-hungry Telamon. And Telamon knows what Hylas doesn’t: that in the chaos of the volcanic eruption, Pirra took the Crows’ prophesized dagger. Aided by Havoc, the lion cub, and Echo, a falcon of the Goddess, Hylas and Pirra will face the Crows once again, in a terrifying epic battle to save the land—or destroy it.
Michelle Paver is the internationally bestselling author of the Chronicles of Ancient Darkness series and the winner of the Guardian Children's Fiction Prize. She lives in the United Kingdom.

"Fast paced with well developed characters and a rich setting, this book will appeal to fantasy and history lovers alike."--VOYA