We Give a Squid a Wedgie (An Accidental Adventure #3) (Paperback) 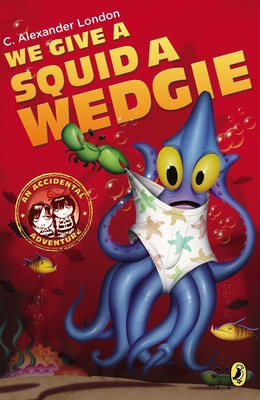 We Give a Squid a Wedgie (An Accidental Adventure #3) (Paperback)

This is book number 3 in the An Accidental Adventure series.

If Oliver and Celia Navel had any hopes this year would be less life-threatening than the last, their hopes are quickly shattered…along with their television set. When a strange scientist warns them that their mother is—yet again—in peril, it’s off to the Pacific Ocean they go. But navigating stormy seas proves easy compared to tackling a Kraken—an enormous squid—and the twins think they might have bitten off more than they can chew.  In their quest for Atlantis, Oliver and Celia are in the worst trouble of their young lives; and survival comes down to one seemingly impossible task: giving a squid a wedgie.
C. Alexander London (www.calexanderlondon.com) is the author of Proxy and Guardian, and the middle grade series The Accidental Adventures, Dog Tags, and Tides of War. A former journalist and children's librarian, Alex is now a full time writer in Brooklyn.

You can follow him on Twitter at @ca_london.
"Thrilling and delightful! Finally, an adventure of the very best kind—the kind that happens to other people." — Pseudonymous Bosch, NYT bestselling author of The Secret Series