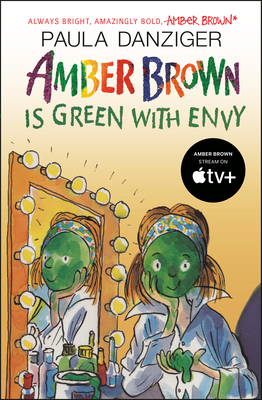 This is book number 9 in the Amber Brown series.

Even when nothing is going according to plan, Amber Brown is always bold, bright, and colorful. #Amber Brown is out now on Apple TV+

Amber's parents just aren't acting the way she thinks parents should. Sometimes her dad goes out on dates when he is supposed to be spending time with her. And her Mom went to Disneyland with Aunt Pam while Amber was with her dad (not fair!).

Then Mom and Max decide to get married even sooner and move to a new house—maybe even a new town.

Some kids seem to have no problems . . . and that makes Amber Brown green with envy.
Paula Danziger wrote more than twenty-five books for children, including The Cat Ate My Gymsuit, There’s a Bat in Bunk Five, Can You Sue Your Parents for Malpractice?, and the Amber Brown series. Paula grew up wanting to be an author… and then she became one. She was the kind of colorful character you might find in one of her books. She loved to play, make new friends, and wear purple clothes and nail polish. Sadly, Paula Danziger passed away on July 8, 2004. Amber Brown—and the rest of her books—will continue live on.

Tony Ross was born in England and studied at the Liverpool School of Art and Design. He has written and illustrated many popular books for children, including What Did I Look Like When I Was a Baby?, The Boy Who Cried Wolf, and Stone Soup, as well as illustrated the popular Amber Brown series. Many of his more than fifty children’s books have won awards throughout the world. Mr. Ross lives with his wife and daughter in Cheshire, England.
The enormously popular heroine once again brings insightful verbalization to what life is like for kids today. (School Library Journal)