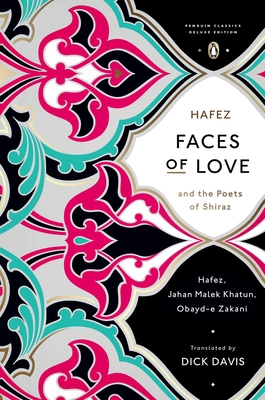 Together, Hafez, a giant of world literature; Jahan Malek Khatun, an eloquent princess; and Obayd-e Zakani, a dissolute satirist, represent one of the most remarkable literary flowerings of any era. All three lived in the famed city of Shiraz, a provincial capital of south-central Iran, and all three drew support from arts-loving rulers during a time better known for its violence than its creative brilliance. Here Dick Davis, an award-winning poet widely considered “our finest translator of Persian poetry” (The Times Literary Supplement), presents a diverse selection of some of the best poems by these world-renowned authors and shows us the spiritual and secular aspects of love, in varieties embracing every aspect of the human heart.

“Davis [is] widely acknowledged as the leading translator of Persian literature in our time…Faces of Love has made the Persian originals into real and moving English poems.” —Michael Dirda, The Washington Post

For more than sixty-five years, Penguin has been the leading publisher of classic literature in the English-speaking world. With more than 1,500 titles, Penguin Classics represents a global bookshelf of the best works throughout history and across genres and disciplines. Readers trust the series to provide authoritative texts enhanced by introductions and notes by distinguished scholars and contemporary authors, as well as up-to-date translations by award-winning translators.
Persian lyric poet Hafiz (born Khwāja Šamsu d-Dīn Muḥammad Hāfez-e Šīrāzī) grew up in Shiraz. Very little is known about his life, but it is thought that he may have memorized the Qur’an after hearing his father recite passages. He became a poet at the court of Abu Ishak and also taught at a religious college. As the author of numerous ghazals expressing love, spirituality, and protest, he is one of the most celebrated of the Persian poets and and his influence can be felt to this day.

Dick Davis is a translator, a poet, and a scholar of Persian literature who has published more than twenty books. He is a fellow of the Royal Society of Literature and has taught at the University of California at Santa Barbara and Ohio State University. He lives in Columbus, Ohio. is the foremost English-speaking scholar of medieval Persian poetry now working in the West. He read English at Cambridge, lived in Iran for eight years (where he met and married his Iranian wife Afkham Darbandi), then completed a PhD in Medieval Persian Literature at the University of Manchester. He has resided for extended periods in both Greece and Italy (his translations include works from Italian), and has taught at both the University of California and at Ohio State University, where he was for nine years Professor of Persian and Chair of the Department of Near Eastern Languages, retiring from that position in 2012. In all, he has published more than twenty books, including the award-winning poetry collections Seeing the World and Belonging. His translations include Ferdowsi's Shahnameh: the Persian Book of Kings and Farid ud-Din Attar's The Conference of the Birds. The Times Literary Supplement has called him 'our finest translator of Persian poetry'.
A Choice Magazine Outstanding Academic Title for 2013

“Davis [is] widely acknowledged as the leading translator of Persian literature in our time…Faces of Love has made the Persian originals into real and moving English poems.”
—Michael Dirda, The Washington Post

"Davis has done something I’d thought impossible: given us an Englished Hafez whose verses retain an intimation of what all the fuss is about...this anthology is a revelation."
—Michael Robbins, The Chicago Tribune

"Radiant...Davis expertly elucidates the conventions these poets worked within and played against."
—A. E. Stallings, The Times Literary Supplement Books of the Year

"Dick Davis’s love affair with Persian literature has resulted in another marvelous offspring. Faces of Love reveals to us the mysterious connections between three vastly different fourteenth-century Persian poets. Through their eyes, Davis brings us that other Iran of poetry, lyrical beauty, diversity, and sensuality; only a lover and a poet could so passionately and meticulously capture the true spirit of these magnificent poems that transcend the boundaries of space and time."
—Azar Nafisi, author of Reading Lolita in Tehran

"For me, the most remarkable poetic translation project in the last twenty years has been Dick Davis’ ambitious recreations of classical Persian literature. In book after book, Davis has memorably translated one of the world’s great literatures into real English-language poetry. Finally, Davis has brought us new versions of Hafez and the great Shiraz poets. What can I say about this new book except: Yes! at last we meet one of the greatest lyric poets in history fully alive in English."
—Dana Gioia, former chairman of the NEA and author of Pity the Beautiful: Poems

"In this heady volume of wine, roses, nightingales, and forbidden trysts, Dick Davis shows us three faces of medieval Persian love poetry: the elusively mystical, the searingly personal, and the gleefully profane. For those of us unfamiliar with this world, the excitement is something akin to stumbling across a new Pindar, Sappho, and Catullus in a single volume—that is, if they were contemporaries and flourished in the same small town. This book is equally valuable for its wide-ranging introduction and pellucid and musical translations (quotable as English poems in their own right)—it would be worthwhile for either, but is a gem for both. Perhaps the most thrilling surprise contained here, however, is the debut in English (if not the West) of Jahan Malek Khatun, an intellectual princess whose bold and moving poems of heartbreak (often daring in their exploration of gender roles) and exile are a revelation. Her pen name means “the world” and indeed we feel that, in bringing these poems into our language, scholar, poet, and translator Dick Davis has opened a new world for us. One couldn’t write a better description of this volume than one of her own epigrams:
Shiraz when spring is here—what pleasure equals this?
With streams to sit by, wine to drink, and lips to kiss,
With mingled sounds of drums and lutes and harps and flutes;
Then, with a nice young lover near, Shiraz is bliss"
—A.E. Stallings, MacArthur Fellow and author of Olives