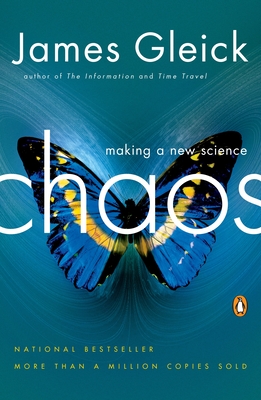 
Not On Our Shelves—Ships in 1-5 Days
The million-copy bestseller by National Book Award nominee and Pulitzer Prize finalist James Gleick—the author of Time Travel: A History—that reveals the science behind chaos theory

A work of popular science in the tradition of Stephen Hawking and Carl Sagan, this 20th-anniversary edition of James Gleick’s groundbreaking bestseller Chaos introduces a whole new readership to chaos theory, one of the most significant waves of scientific knowledge in our time. From Edward Lorenz’s discovery of the Butterfly Effect, to Mitchell Feigenbaum’s calculation of a universal constant, to Benoit Mandelbrot’s concept of fractals, which created a new geometry of nature, Gleick’s engaging narrative focuses on the key figures whose genius converged to chart an innovative direction for science. In Chaos, Gleick makes the story of chaos theory not only fascinating but also accessible to beginners, and opens our eyes to a surprising new view of the universe.
James Gleick was born in New York City in 1954. He worked for ten years as an editor and reporter for The New York Times, founded an early Internet portal, the Pipeline, and has written several books of popular science, including The Information: A History, a Theory, a Flood, which won the PEN/E. O. Wilson Literary Science Writing Award, and Time Travel: A History. He lives in Key West and New York.
“Fascinating . . . almost every paragraph contains a jolt.” —The New York Times

“Taut and exciting . . . a fascinating illustration of how the pattern of science changes.” —The New York Times Book Review

“An awe-inspiring book. Reading it gave me that sensation that someone had just found the light switch.” —Douglas Adams, author of The Hitchhiker’s Guide to the Galaxy

“Chaos is a feast.” —The Washington Post Book World