LeBron's Dream Team: How Four Friends and I Brought a Championsip Home (Paperback) 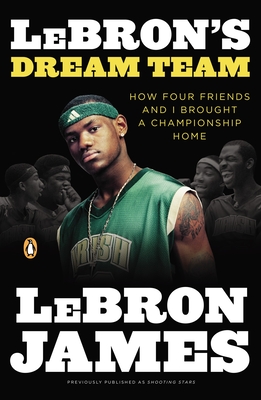 LeBron's Dream Team: How Four Friends and I Brought a Championsip Home (Paperback)


Special Order—Subject to Availability
The DREAM TEAM was a bunch of kids from Akron, Ohio-LeBron James and his best friends-who first met on a youth basketball team of the same name when they were ten and eleven years old. United by their love of the game and their yearning for companionship, they quickly forged a bond which would carry them through thick and thin (a lot of thin) and, at last, to the brink of a national championship.

They were a motley group who faced challenges all too typical of inner-city America. LeBron grew up without a father and had moved with his mother more than a dozen times by the age of 10. Willie McGee, the quiet one, had left both his parents behind in Chicago to be raised by his older brother in Akron. Dru Joyce was outspoken, and his dad, who was ever-present, would end up coaching all five of the boys in high school. Sian Cotton, who also played football, was the happy-go-lucky enforcer, while Romeo Travis was unhappy, bitter, even surly, until he finally opened himself up to the bond his team mates offered.

In the summer after seventh grade, the DREAM TEAM tasted glory when they qualified for a national championship tournament in Memphis. But they lost their focus, and had to go home early. They promised each other they would stay together and do whatever it took to win a national title.

They had no idea how hard it would be to pursue that promise. In the years that followed, they would endure jealousy, hostility, exploitation, resentment from the black community (because they went to a "white" high school), and the consequence of their own over-confidence. Not least, they would all have to wrestle with LeBron's outsize success, which brought too much attention and even a whiff of scandal their way. But together these five boys became men as they sought a national championship.
LeBron James plays for the NBA’s Cleveland Cavaliers. At seventeen he was featured on the cover of Sports Illustrated; at nineteen he became the youngest Rookie of the Year in NBA history; at twenty-three he is the third-highest-paid athlete in the world (including endorsements). He has hosted Saturday Night Live, graced Oprah’s stage, and appeared on the cover of Fortune.

Buzz Bissinger is the author of A Prayer for the City, the New York Times bestseller Three Nights in August, and Friday Night Lights, which has sold almost 2 million copies to date and spawned a film and a TV series. He is a contributing writer for Vanity Fair.
“Compelling . . . An uplifting tale of bonding, of a handful of friends who grow as tight as brothers as they get squeezed by pressure, expectations and even racism. It’s hard not to root for the group, and it’s gratifying when their hard work and loyalty to each other leads to a happy ending.”
—Associated Press

“The most high-powered pairing. LeBron. Buzz. The mononymous stars in their respective fields—basketball’s James, sports books’ Bissinger—teamed up on [LeBron’s Dream Team] . . . an entertaining, well-written reminder that even if he seems to have been around forever, James didn’t go directly from the nursery to the NBA.” —Sports Illustrated

“[James] was smart to hook up with Mr. Bissinger, who showed in Friday Night Lights that he writes about young men and sports as well as anyone alive.” —The New York Times

“You’ll learn a lot about [James] and his hard times as the son of a single, working-class mother, but what distinguishes the memoir is how James turns the spotlight on his teammates. James got all the attention as the star player for St. Vincent-St. Mary High School, and [LeBron’s Dream Team] is his way of giving thanks to the supporting cast.” —Newsday

“This is a coming-of-age tale, approached from a different angle, and deftly done. The reportage is thorough to a fare-thee-well, what you would expect from a seasoned veteran, and their overall collaboration makes for an engaging read.” —The Philadelphia Inquirer

“For the ordinary reader, [LeBron’s Dream Team] also delivers an emotional wallop. The book can be read as a variation on the themes of masculinity, as a young LeBron and his buddies try out different approaches.” —The Cleveland Plain Dealer

“A poignant memoir chronicling [LeBron’s] formative years and coming of age in Akron, Ohio . . . A compelling autobiography illustrating the evolution of LeBron into a selfless role model worthy of emulation.” —Newsblaze.com

“The coauthors dramatically re-create the minute- by-minute highlights of key games in St.V’s national-championship drive, but they also interject some serious social commentary on the vindictiveness, greed and exploitation that can infect the seemingly pristine world of amateur sports. . . . A simple but moving story about the double-edged sword of precocious athletic talent and the redemptive power of teamwork.” —Kirkus Reviews

“A warm, thoughtful memoir by a young man who, one imagines, will never forget his humble origins.” —Booklist

“When I first saw LeBron James play as a professional, it was his selflessness that dazzled me the most. After reading [LeBron’s Dream Team], I now understand why. It is a book of five boys coming together to learn the true meaning of teamwork and togetherness, loyalty and love, through highs and lows and thick and thin. It is a book filled with excitement and unforgettable characters. It is a book that will incredibly move and inspire you.” —Jay-Z

“Our sense of modern athletes is often limited to what highlight reels and marketing campaigns reveal or obscure. [LeBron’s Dream Team] is the compelling and often poignant story of a remarkable group of young men only one of whom happens to be a future NBA superstar. In the end we care about them all, even as we come away with a truer understanding and appreciation of the circumstances and relationships that forged one of the most significant sports figures of our time.” —Bob Costas, NBC sports commentator

“In the Olympics, LeBron was a star, a leader, and the ultimate teammate. He helped our team become a family. Reading [LeBron’s Dream Team] taught me how he became that kind of a teammate, developing the selflessness and loyalty that define who he is. What an amazing story.”
—Mike Krzyzewski, Duke University men’s basketball coach and the Gold Medal-winning coach of the U.S. men’s basketball team, 2008 Olympics

“Reading about LeBron James’ transition from boyhood to manhood was a thrill for me. [LeBron’s Dream Team] is a remarkable and riveting story, filled with lessons of life we can all learn from.” —Warren Buffett

“The clock ticks, the suspense tightens, the scrappy kids from hard-luck Akron leave you hanging on every shot. But the wonder of [LeBron’s Dream Team] is that it’s hardly about basketball. Instead it is a nuanced coming-of-age drama about American culture and race, about organized sports as redeemer and exploiter, and about the blessing and curse of celebrity. At this book’s heart, though, is an uncommon bond forged in youthful innocence and desire, a friendship at least as meaningful as anything LeBron James will ever add to his trophy case.” —Steve Lopez, author of The Soloist

“Told in a voice that is streetwise, yet gentle, [LeBron’s Dream Team] shows how inner determination trumps bad breaks and how a winning combination of coaches, mentors, and friends turns lucky breaks into a way of life. If a book can have game, this one does.” —Madeleine Blais, author of In These Girls, Hope Is a Muscle