The Great Degeneration: How Institutions Decay and Economies Die (Paperback) 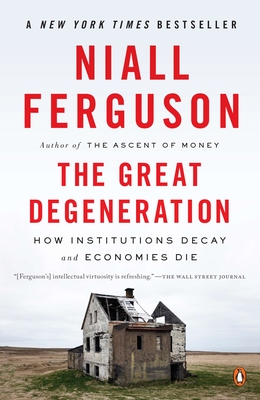 The Great Degeneration: How Institutions Decay and Economies Die (Paperback)


Backordered
From the bestselling author of The Ascent of Money and The Square and the Tower, a searching and provocative examination of the widespread institutional rot that threatens our collective future

What causes rich countries to lose their way? Symptoms of decline are all around us today: slowing growth, crushing debts, increasing inequality, aging populations, antisocial behavior. But what exactly has gone wrong? The answer, Niall Ferguson argues in The Great Degeneration, is that our institutions—the intricate frameworks within which a society can flourish or fail—are degenerating. With characteristic verve and historical insight, Ferguson analyzes the causes of this stagnation and its profound consequences for the future of the West. The Great Degeneration is an incisive indictment of an era of negligence and complacency—and to arrest the breakdown of our civilization, Ferguson warns, will take heroic leadership and radical reform.
Niall Ferguson is one of the world's most renowned historians. He is the author of Paper and Iron, The House of Rothschild, The Pity of War, The Cash Nexus, Empire, Colossus, The War of the World, The Ascent of Money, High Financier, Civilization, The Great Degeneration, Kissinger, 1923-1968: The Idealist, and The Square and the Tower. He is Senior Fellow at the Hoover Institution, Stanford University, and a Visiting Professor at Tsinghua University, Beijing. His many awards include the Benjamin Franklin Prize for Public Service (2010), the Hayek Prize for Lifetime Achievement (2012) and the Ludwig Erhard Prize for Economic Journalism (2013).
“[Ferguson’s] intellectual virtuosity is refreshing. ’The Great Degeneration’ won't be popular in the Obama White House or other centers of power. Jeremiah wasn't popular with the elders of Judea either. They tossed him in jail for his sedition. They had reason later to be sorry.”—The Wall Street Journal

"Brilliantly written, full of wit and virtuosity, stuffed with memorable lines and gorgeous bits of information. A great read."—The Times (London) (on Civilization)

"This is sharp. It feels urgent. Ferguson... twists his knife with great literary brio."—Andrew Marr (on Civilization)

"A masterpiece ... fascinating facts burst like fireworks on every page."—Sunday Times

"Brings history alive for the reader with a dazzling knowledge ... peerless."—Independent on Sunday