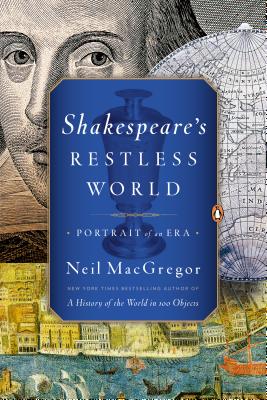 We feel we know Shakespeare’s characters. Think of Hamlet, trapped in indecision, or Macbeth’s merciless and ultimately self-destructive ambition, or the Machiavellian rise and short reign of Richard III. They are so vital, so alive and real that we can see aspects of ourselves in them. But their world was at once familiar and nothing like our own.

In this brilliant work of historical reconstruction Neil MacGregor and his team at the British Museum, working together in a landmark collaboration with the Royal Shakespeare Company and the BBC, bring us twenty objects that capture the essence of Shakespeare’s universe. A perfect complement to A History of the World in 100 Objects, MacGregor’s landmark New York Times bestseller, Shakespeare’s Restless World highlights a turning point in human history.

This magnificent book, illustrated throughout with more than one hundred vibrant color photographs, invites you to travel back in history and to touch, smell, and feel what life was like at that pivotal moment, when humankind leaped into the modern age. This was an exhilarating time when discoveries in science and technology altered the parameters of the known world. Sir Francis Drake’s circumnavigation map allows us to imagine the age of exploration from the point of view of one of its most ambitious navigators. A bishop’s cup captures the most sacred and divisive act in Christendom.

With A History of the World in 100 Objects, MacGregor pioneered a new way of telling history through artifacts. Now he trains his eye closer to home, on a subject that has mesmerized him since childhood, and lets us see Shakespeare and his world in a whole new light.
Neil MacGregor has been the director of the British Museum since 2002; prior to that, he was the director of the National Gallery in London. He is the author of the New York Times bestseller A History of the World in 100 Objects.
Praise for Shakespeare’s Restless World

“What did Elizabethan theatergoers eat while watching Hamlet? British Museum Director MacGregor answers that question and many others as he examines 20 objects, now in museums and libraries, that illuminate daily life in Shakespearean England. . . . Beautifully illustrated, MacGregor’s history offers a vibrant portrait of Shakespeare’s dramatic, perilous, and exhilarating world.”
—Kirkus Reviews (starred review)

“Visually splendid, intellectually stimulating . . . Just as he did in A History of the World in 100 Objects, MacGregor repeatedly converts fascinating objects into talismans transporting readers across time and geography.”
—Booklist (starred review)

“Neil MacGregor offers sparkling insights into Shakespeare’s times and how the Elizabethans really lived. . . . Filled with anecdotes and insights, eerie, funny, poignant and grotesque, Shakespeare’s Restless World is another brilliant vindication of MacGregor’s understanding of how physical objects enter deep into our fore-father’s mental and spiritual world.”

“MacGregor wants us to see both how the past shapes and shades our present but—equally—how strange and alien it should feel. . . . He shows time and again how the epoch-making changes that the Stratford playwright both lived through and expressed still echo through our arguments and anxieties over community and identity.”

“A revelation . . . MacGregor’s choice of clocks, mirrors, and swords opens a door on to the lost world of London’s theatregoers in and around 1600. . . . The interrogation of these objects yields a sequence of fascinating footnotes to Shakespeare’s timeless poetry.”
—The Observer (London)