The Shifts and the Shocks: What We've Learned--and Have Still to Learn--from the Financial Crisis (Paperback) 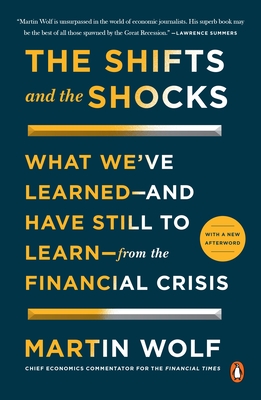 The Shifts and the Shocks: What We've Learned--and Have Still to Learn--from the Financial Crisis (Paperback)

There have been many books that have sought to explain the causes and courses of the financial and economic crisis that began in 2007. The Shifts and the Shocks is not another detailed history of the crisis but is the most persuasive and complete account yet published of what the crisis should teach us about modern economies and econom­ics. Written with all the intellectual command and trenchant judgment that have made Martin Wolf one of the world’s most influential economic com­mentators, The Shifts and the Shocks matches impressive analysis with no-holds-barred criti­cism and persuasive prescription for a more stable future. It is a book no one with an interest in global affairs will want to neglect.

Martin Wolf is the associate editor and chief economics commentator for the Financial Times. He is the recipient of many awards for financial journalism, for which he was also made a Commander of the Order of the British Empire in 2000. His previous books include Fixing Global Finance and Why Globalization Works.
Joseph Stiglitz, Financial Times:
“Martin Wolf has outdone himself. The FT’s chief economics commentator has written a book that not only explains the malaise in which we have been mired since 2008 but also – depressingly – provides a convincing analysis of why we are likely to remain so. Already, the crisis has spawned a plethora of titles examining what went wrong. The Shifts and the Shocks is among the first to address the absence of a robust recovery and it sets a high bar for those that will surely follow…One of the things that distinguishes Wolf’s analysis from so many others is that he sees the crisis as more than a financial crisis – an insight that is essential if we are to understand the failure to achieve a robust recovery…Wolf may have written the book to shake us out of our stupor.”

The Economist:
"A fierce indictment of the global economy and a call for radical reform…Mr Wolf’s contribution is comprehensiveness and a piercing logic in piecing the disparate elements together."

Felix Salmon, The New York Times Book Review:
“Martin Wolf is as grand and important as an economic journalist can ever become.... The Shifts and the Shocks is extremely good at untangling the causes of the global financial crisis.”

Ben Bernanke:
“Building on his earlier book, Fixing Global Finance, in The Shifts and the Shocks Martin Wolf provides an insightful and timely analysis of how global imbalances, international capital flows, and economic policies have helped create a financially fragile world.”

Lawrence Summers:
“Martin Wolf is unsurpassed in the world of economic journalists. His superb book may be the best of all those spawned by the Great Recession. It is analytical and rigorous and without ever succumbing to fatalism or complacency. It should be read by anyone concerned with macroeconomic or financial policy going forward.”

Mervyn King:
“A masterly account of the financial crisis seen in its true international perspective.”

Adair Turner:
“The 2008 financial crisis was an economic disaster, but as Martin Wolf brilliantly argues the policy response has failed to address the fundamental drivers of instability—excessive debt creation, global imbalances and inequality. To think straight about causes and solutions we must reject orthodox assumptions that more finance and global financial integration are limitlessly beneficial. The Shifts and the Shocks does just that, providing an intellectually sparkling and vital account of why the crisis occurred, and of the radical reforms needed if we are to avoid a future repeat.”

Paul Tucker, Senior Fellow, Harvard University:
“Martin Wolf has ranged more widely than perhaps any other author in trying to make sense of the global financial crisis and how to avoid its recurrence. Macroeconomics, finance, ideas, institutions, policy, politics; Europe, Asia, the US—they are all here. Whether or not one agrees with Wolf’s analysis and prescriptions, this book will help everyone work out what they think. A must read.”

Anat Admati, Stanford University; co-author of The Bankers’ New Clothes: What’s Wrong with Banking and What to Do About It:
“In this powerful and important book, Martin Wolf exposes the forces that shaped our fragile financial system and brought harm to so many, with particular attention to the crisis in Europe. His insights and urgent call to prevent more harm must be heard.”

William H. Janeway, Warburg Pincus; University of Cambridge:
"Martin Wolf has been the world's leading commentator on the Global Financial Crisis and its economic consequences: now in The Shifts and the Shocks he demonstrates with compelling force that the essential response to financial fragility is to make banks boring: lots more capital, much lower prospective returns."