The Elephant in the Womb (Paperback) 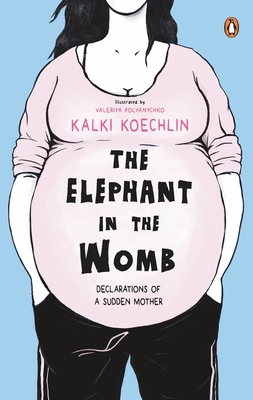 The Elephant in the Womb (Paperback)

Motherhood is the greatest job in the world...right?

In this unique graphic narrative, we finally have that candid, funny and relatable book on pregnancy and parenting that mothers, expectant mothers, and anyone even thinking about motherhood have been waiting for. Actor and writer Kalki Koechlin opens up about so much that we don't talk about-the social stigma of abortions and unmarried pregnancies, the toll that pregnancy takes on a body, the unacknowledged domestic labour of women, the emotional rollercoaster of giving birth, bouts of postpartum melancholy, the unsolicited parenting advice from every corner, and of course the innumerable moments of joy and delight in bringing a real little person into this very weird world.

With whimsy and compassion, with uproariously funny art and spellbinding honesty, The Elephant in the Womb blends the deeply private with the blazingly political. It's an eye-opener for anyone who has ever thought that pregnancy was all about the glow and that motherhood was all about fulfilment. From fixing broken parts to enduring untimely farts, Koechlin's nuanced prose-gorgeously illustrated by Valeriya Polyanychko-tells us the bare-faced truth about the physiological discomfort and manic expectations that make it a bittersweet experience.

With a combination of personal essays and think-pieces, journal entries captured in real time, reflections and anecdotes, this is the motherload!

Kalki Koechlin (Author)
Kalki Koechlin is a French-Indian actor and writer living in Mumbai. She studied drama and theatre at Goldsmiths, and made her screen debut as Chanda in the critically acclaimed drama Dev.D in 2009. She won a FIlmfare award for the same. She is also the recipient of a National Award and Best Actress award at the Tallinn Black Nights Film Festival for the internationally applauded film, Margarita with a Straw. She has also acted in two of Bollywood's highest grossing films of their respective years, Yeh Jewani Hai Deewani and Zindagi Na Milegi Dobara. She hosts a podcast with the BBC called My Indian Life, and is part of several series streaming on Netflix and Amazon. Throughout her career, she has continued to write and perform for the theatre, often with her original material. She won the Hindu Metroplus Playwright Award in 2009 along with co writer Prashant Prakash for Skeleton Woman. Her work often addresses the issues of women's rights and freedom of speech. She is a feminist and an advocate of children's rights.

Valeriya Polyanychko (Illustrator)
Valeriya Polyanychko is a multi-disciplinary visual artist dabbling between the vast expanses of doodles, illustrations, animation and production designs for motion pictures. As a young artist, she was spotted in the small town of Shostka, for finishing her art school exams at the age of just fourteen, whereupon she was offered a scholarship University Of Culture and Art in Kiev, Ukraine. In 2010, she was identified as an upcoming design talent in Ukraine and won a grant prize ( Top 10 Young Designers Of Ukraine competition). This offered her the opportunity to travel to Asia. As a lifelong admirer of Asian art forms, she has travelled extensively across India, Vietnam, Nepal, Malaysia and Thailand, adopting much of the vibrant design sensibility into her own aesthetic. She presently lives between India and Ukraine, and can often be found sketching her four cats and three dogs - all of whom she considers her muse. The forest behind her home is her favourite place to daydream.