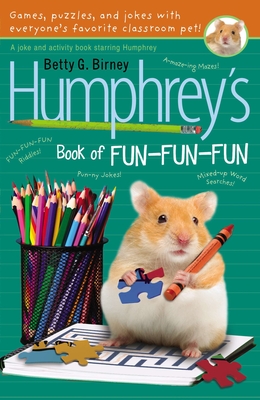 Humphrey has learned a lot from being the classroom hamster in Room 26 at Longfellow School. And although he loves having amazing adventures in and out of his cage, he’s also quite good at solving puzzles and telling the most hilarious jokes! In fact, he’s put together this whole book of his favorite games, brain teasers, and jokes for everyone who thinks they can be as smart (or as funny) as a hamster! Come and have some FUN-FUN-FUN with everyone’s favorite classroom pet!

Nominated for twenty-four state awards and the winner of seven, the Humphrey series is a hit across the country. And he's becoming a one school/one book favorite!
Betty G. Birney lives in Los Angeles, California. Her
website (www.bettybirney.com) is full of fun Humphrey
activities and information.
“Humphrey is a witty, fun, and lovable character with great kid appeal.”—School Library Journal

Humphrey is on 24 state lists and counting!

The World According to Humphrey

North Carolina Battle of the Books