A Time to Dance (Paperback) 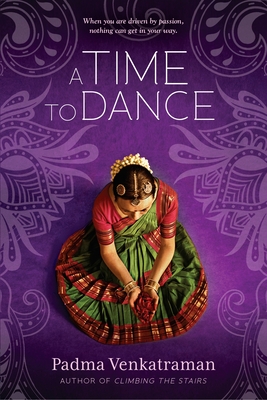 A Time to Dance (Paperback)


Not On Our Shelves—Ships in 1-5 Days
Padma Venkatraman’s inspiring story of a young girl’s struggle to regain her passion and find a new peace is told lyrically through verse that captures the beauty and mystery of India and the ancient bharatanatyam dance form. This is a stunning novel about spiritual awakening, the power of art, and above all, the courage and resilience of the human spirit.

Veda, a classical dance prodigy in India, lives and breathes dance—so when an accident leaves her a below-knee amputee, her dreams are shattered. For a girl who’s grown used to receiving applause for her dance prowess and flexibility, adjusting to a prosthetic leg is painful and humbling. But Veda refuses to let her disability rob her of her dreams, and she starts all over again, taking beginner classes with the youngest dancers. Then Veda meets Govinda, a young man who approaches dance as a spiritual pursuit. As their relationship deepens, Veda reconnects with the world around her, and begins to discover who she is and what dance truly means to her.
Padma Venkatraman (www.padmasbooks.com) is an oceanographer by training and a writer by choice. Her critically acclaimed novels Climbing the Stairs and Island’s End were both ALA/YALSA Best Books for Young Adults, Booklist Editor's Choice BBYAs, Amelia Bloomer list selections and CCBC choices, in addition to winning several other honors and awards (such as the South Asia Book Award, Paterson Prize, Julia Ward Howe BAC award, NYPL Book for the Teen Age, Kirkus Best Book of the Year, Booksense Notable, and PW Flying Start). Padma was born in India, but is now an American citizen and lives with her family in Rhode Island.
"Venkatraman has created a rich, exotic, and fully human world that dazzles and delights. Her way with prose reflects Veda's with dancing: 'Nothing else fills me with as much elation as chasing down soaring music' This novel accomplishes exactly that."--Providence Sunday Journal

"[A] powerful depiction of a teen girl struggling to recover from an accident."--The Chicago Tribune

* " Set against a cardamom, melted butter, and semolina sojji-wafted landscape, the novel’s emotional expression and accompanying music impel the reader to share Veda’s belief that “Shiva dances everywhere. In everyone. In everything.”--Booklist, starred review

* “ Told in verse, this story is magnificently strong as Veda’s determination dances off the page and into the reader’s heart.”--VOYA, starred review

* “This exceptional novel, told entirely in verse, captures beautifully the emotions of a girl forced to deal with a number of challenges and how she overcomes them on her way to becoming a confident young woman. It is sure to appeal to readers who are also trying to find their place in the world.”--School Library Journal, starred review — various