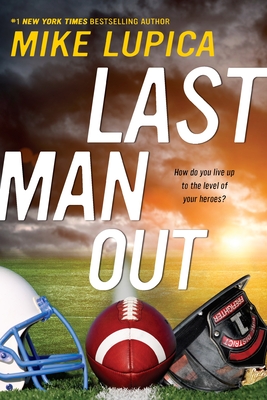 
Not On Our Shelves—Ships in 1-5 Days
From the #1 bestselling author of Heat, Travel Team and Fantasy League comes a story of heroes, family, the thrills of skateboarding, and football.

When the Brighton Bears suit up on game day, 12-year-old Tommy Gallagher is the toughest kid on the football field. And the bravest. After all, his father Patrick is a Boston firefighter--one of Boston's bravest. Tommy's dad taught him everything he knows about football--and life. Yet even Tommy isn't strong enough for what happens when the sirens ring and, for the first time, they're racing away from the fire. "First man in; last man out" had always been his dad's motto . . . yet he never said anything about leaving in an ambulance. Now Tommy's biggest battle has nothing to do with football. And the kid who always had such respect for risk on the gridiron finds himself drawn to it off the field.

Set in New England, home of the Patriots' football dynasty, Mike Lupica shows off his trademark knack for spinning a tale that's equal parts sports action and heart. Last Man Out is a thoughtful tribute to the bravery of firefighters and the need we all have to live up to the level of our heroes.


"As is characteristic of Lupica’s books, the sports segments, most particularly the football portions, are exceptionally well written." —VOYA

"In the best traditions of sports writing, this will leave readers both breathless and thoughtful." —Booklist

Mike Lupica (mikelupicabooks.com) is the #1 bestselling author of many popular books for young readers, including Fantasy League, Travel Team, Heat, and Million-Dollar Throw. He has carved out a niche as the sporting world’s finest storyteller. Mike lives in Connecticut with his wife and their four children. When not writing novels, Mike Lupica writes for New York's Daily News and appears weekly on ESPN's The Sports Reporters.
Praise for Last Man Out

"[S]hort, action-packed chapters . . . will keep even the most reluctant readers motivated to keep reading. As is characteristic of Lupica’s books, the sports segments, most particularly the football portions, are exceptionally well written." —VOYA

"Lupica stirs equal quantities of grief and gridiron action into his latest outing. Lupica effectively puts readers into the center of the action . . . [I]n the best traditionsof sports writing, this will leave readers both breathless and thoughtful." —Booklist

“Lupica has the knowledge of the game and the lean prose to make a taut, realistic story not just about the game but about heart, character, and family.” —Kirkus Reviews on Travel Team

* “The dialogue crackles, and the rich cast of supporting characters nearly steals the show. Top-notch entertainment in the Carl Hiaasen mold.” —Booklist, starred review of Heat

“Lupica gives his readers a behind-the-scenes look at major league sports. In this novel, he adds genuine insights into family dynamics.” —Booklist on The Batboy

“Lupica will win a Pulitzer for his sportswriting one day (he should have won it already).” —The New York Times on Heat