A Ride into Morning: The Story of Tempe Wick (Great Episodes) (Paperback) 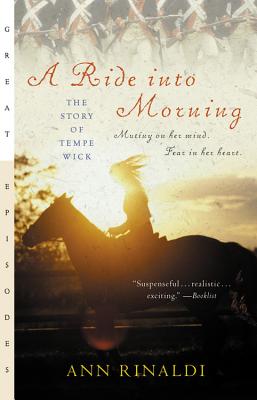 A Ride into Morning: The Story of Tempe Wick (Great Episodes) (Paperback)

The Revolutionary War is raging. General Wayne's soldiers are freezing, underpaid, and resentful. Whispers of mutiny abound.
A stone's throw from the restless camp, Tempe Wick wages her own battle for survival. Despite her efforts, she fears she won't be able to feed her family, care for her ailing mother, or maintain her farm for long.
As the whispers get louder, the soldiers get bolder. Mutiny is imminent. And Tempe faces a gut-wrenching decision: Should she join the revolt?
Ann Rinaldi's dramatic story is based on the legend of America's Tempe Wick.
Reader's guide included.