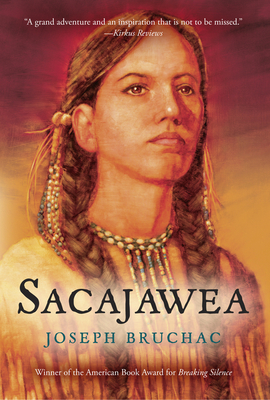 
Not On Our Shelves—Ships in 1-5 Days
Captured by her enemies, married to a foreigner, and a mother at age sixteen, Sacajawea lived a life of turmoil and change. Then, in 1804, the mysterious young Shoshone woman met Meriwether Lewis and William Clark. Acting as interpreter, peacemaker, and guide, Sacajawea bravely embarked on an epic journey that altered history forever. Hear her extraordinary story, in the voices of Sacajawea and William Clark in alternating chapters, with selections from Clark’s original diaries.      Includes a map of Lewis and Clark’s trail and an author’s note.

JOSEPH BRUCHAC is a poet, storyteller, and author of more than sixty books for children and adults who has received many literary honors, including the American Book Award and the PEN Syndicated Fiction Award. He is of Abenaki and Slovak heritage, and lives in Greenfield Center, New York.

[star] “An engaging book to share with young adults, who will find it all the more fascinating to learn that Sacajawea was a teenager when she made history with Lewis and Clark.”—School Library Journal (starred)“A grand adventure and an inspiration that is not to be missed.”—Kirkus Reviews —