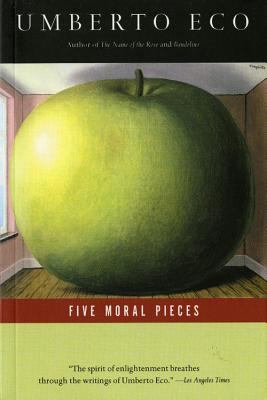 
Not On Our Shelves—Ships in 1-5 Days
Embracing the web of multiculturalism that has become a fact of contemporary life from New York to New Delhi, Eco argues that we are more connected to people of other traditions and customs than ever before, making tolerance the ultimate value in today's world. What good does war do in a world where the flow of goods, services, and information is unstoppable and the enemy is always behind the lines?
In the most personal of the essays, Eco recalls experiencing liberation from fascism in Italy as a boy, and examines the various historical forms of fascism, always with an eye toward such ugly manifestations today. And finally, in an intensely personal open letter to an Italian cardinal, Eco reflects on a question underlying all the reflections in the book--what does it mean to be moral or ethical when one doesn't believe in God?

UMBERTO ECO (1932–2016) was the author of numerous essay collections and seven novels, including The Name of the Rose,The Prague Cemetery, and Inventing the Enemy. He received Italy’s highest literary award, the Premio Strega, was named a Chevalier de la Légion d’Honneur by the French government, and was an honorary member of the American Academy of Arts and Letters.

"Instead of that tone of constipated envy we associate with criticism,
Eco's essays read like letters from a friend, trying to share something he loves
with someone he likes."--San Francisco Review of Books

"One of the most influential thinkers of our time."--Los Angeles Times