The Places In Between (Paperback) 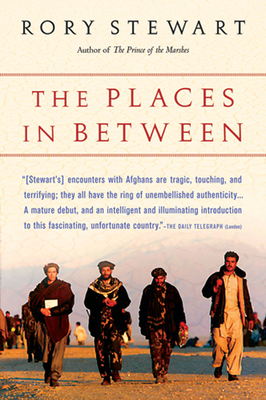 The Places In Between (Paperback)


On Our Shelves Now at:
A New York Times Bestseller
This acccount of a 36-day walk across Afghanistan, starting just weeks after the fall of the Taliban, is “stupendous…an instant travel classic” (Entertainment Weekly).

In January 2002, Rory Stewart walked across Afghanistan, surviving by his wits, his knowledge of Persian dialects and Muslim customs, and the kindness of strangers. By day he passed through mountains covered in nine feet of snow, hamlets burned and emptied by the Taliban, and communities thriving amid the remains of medieval civilizations. By night he slept on villagers' floors, shared their meals, and listened to their stories of the recent and ancient past. Along the way Stewart met heroes and rogues, tribal elders and teenage soldiers, Taliban commanders and foreign-aid workers. He was also adopted by an unexpected companion—a retired fighting mastiff he named Babur in honor of Afghanistan's first Mughal emperor, in whose footsteps the pair was following.

Through these encounters—by turns touching, confounding, surprising, and funny—Stewart makes tangible the forces of tradition, ideology, and allegiance that shape life in the map's countless places in between.
RORY STEWART is the best-selling author of The Places in Between and The Prince of the Marshes. A former director of the Carr Centre for Human Rights Policy and Ryan Professor of Human Rights at Harvard's Kennedy School of Government, he was awarded the Order of the British Empire for services in Iraq. He is the Conservative member of Parliament for Penrith and The Border, a constituency in Northern Cumbria, where he lives with his wife.

PRAISE FOR THE PLACES IN BETWEEN
"A striding, glorious book . . . Learned but gentle, tough but humane, Stewart . . . writes with a mystic’s appreciation of the natural world, a novelist’s sense of character and a comedian’s sense of timing . . . A flat-out masterpiece . . . The Places in Between is, in very nearly every sense, too good to be true."—The New York Times Book Review "A splendid tale that is by turns wryly humorous, intensely observant, and humanely unsentimental."—Christian Science Monitor "Stupendous . . . an instant travel classic."—Entertainment Weekly "Stewart’s 36-day walk across Afghanistan, starting just weeks after the fall of the Taliban, sets a new standard for cool nerve and hot determination . . . His description of the landscapes he traverses makes you feel you’re accompanying him through a shifting, sculpted painting . . . Sublimely written."—The Seattle Times "Stunning . . . That he has written a remarkable memoir of his trek might contribute greatly not only to our reading pleasure, but to our understanding of Afghanistan in the 21st century . . . The Places in Between effectively depicts the spectacularly stark landscape, the utter poverty and the devastation of decades of war. But far more interesting are the men . . . Stewart met along the way." —The Plain Dealer      —