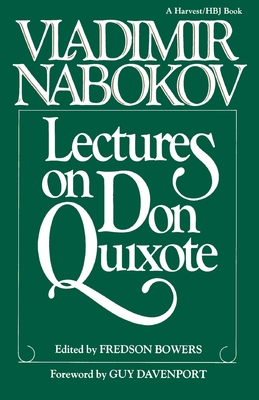 
Not On Our Shelves—Ships in 1-5 Days
A fastidiously shaped series of lectures based on a chapter-by-chapter synopsis of the Spanish classic. Rejecting the common interpretation of Don Quixote as a warm satire, Nabokov perceives the work as a catalog of cruelty through which the gaunt knight passes. Edited and with a Preface by Fredson Bowers; photographs.

Vladimir Nabokov (1899-1977), Russian-born poet, novelist, literary critic, translator, and essayist was awarded the National Medal for Literature for his life's work in 1973. He taught literature at Wellesley, Stanford, Cornell, and Harvard. He is the author of many works including Lolita, Pale Fire, Ada, and Speak, Memory.