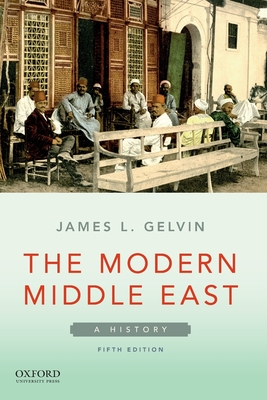 
Not On Our Shelves—Ships in 1-5 Days
Extensively revised and updated in this fifth edition, The Modern Middle East explores how the forces associated with global modernity have shaped the social, economic, cultural, and political life in the region over the course of the past 500 years. Beginning with the first glimmerings of the current international state and economic systems in the sixteenth century, this book examines the impact of imperial and imperialist legacies, the great nineteenth-century transformation, cultural continuities and upheavals, international diplomacy, economic booms and busts, and the emergence of authoritarian regimes and the varied forms of resistance to them and to imperialism in an area of vital concern to us all. The text is engagingly written--drawing from the author's own research and other studies--and enriched with maps and photographs, original documents, and an abundance of supplementary materials.

James L. Gelvin is Professor of History at the University of California, Los Angeles. An award-winning teacher, he is the author of The New Middle East: What Everyone Needs to Know (2017), The Arab Uprisings: What Everyone Needs to Know (2015), The Israel-Palestine Conflict: One Hundred Years of War(2014), Divided Loyalties: Nationalism and Mass Politics in Syria at the Close of Empire (1999), and numerous shorter works. He is also coeditor of Global Muslims in the Age of Steam and Print (2013).