The History of Jazz (Paperback) 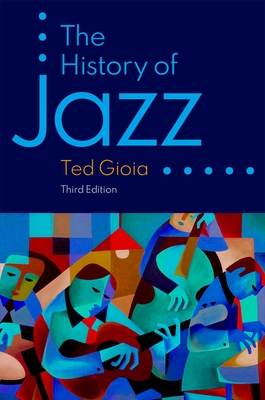 The History of Jazz (Paperback)


In Stock—Click for Locations
An updated new edition of Ted Gioia's universally acclaimed history of jazz, with a wealth of new insight on this music's past, present, and future. Ted Gioia's The History of Jazz has been universally hailed as the most comprehensive and accessible history of the genre of all time. Acclaimed by jazz critics and fans alike, this magnificent work is now available in an up-to-date third edition that covers the latest developments in the jazz world
and revisits virtually every aspect of the music. Gioia's story of jazz brilliantly portrays the most legendary jazz players, the breakthrough styles, and the scenes in which they evolved. From Louis Armstrong and Duke Ellington at the Cotton Club, Miles Davis's legendary 1955 performance at the Newport Jazz Festival, and Ornette Coleman's
experiments with atonality to current innovators such as Kamasi Washington and Esperanza Spalding, Gioia takes readers on a sweeping journey through the history of jazz. As he traces the music through the swamp lands of the Mississippi Delta, the red light district of New Orleans, the rent parties
of Harlem, the speakeasies of Chicago, and other key locales of jazz history, Gioia also makes the social contexts in which the music was born come alive. This new edition finally brings the often overlooked women who shaped the genre into the spotlight and traces the recent developments that have led to an upswing of jazz in contemporary mainstream culture. As it chronicles jazz from its beginnings and most iconic figures to its latest dialogues with
popular music, the developments of the digital age, and new commercial successes, Gioia's History of Jazz reasserts its status as the most authoritative survey of this fascinating music.

Ted Gioia is a pianist, critic, scholar, historian, and educator. He is the author of 11 books, including The History of Jazz (OUP, 2011) and Delta Blues--both honored by the New York Times on their list of 100 notable books of the year. Each of his three books on the social history of music--WorkSongs, Healing Songs, and Love Songs (OUP, 2015)--has been honored with the ASCAP Deems Taylor Award. Gioia holds degrees from Oxford University and Stanford's Graduate School of Business, and previously served on the faculty of Stanford University. Praised as one of the leading music historians ofour day, Gioia is a preeminent guide to the songs of the past, present, and future.