A Political Theory for the Jewish People (Hardcover) 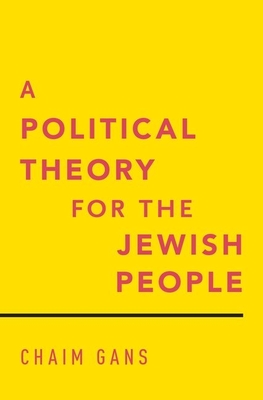 A Political Theory for the Jewish People (Hardcover)


Not On Our Shelves—Ships in 1-5 Days
Chaim Gans's A Political Theory for the Jewish People examines the two dominant interpretations of Zionism, contrasts them with post-Zionist alternatives, and develops a third model. Along with exploring the historiographic, philosophical and moral foundations of each of these approaches, Gans considers their implications for the relationship between Jews and Arabs in Israel/Palestine as well as the relationship between Israeli and diasporic Jews. Proprietary Zionism, Gans argues, is the version that is most popular among the Israeli Jewish public. It conceives of the land of Israel/historic Palestine as the property of the Jewish people. It also conceives of the entire Jewish people as belonging to Israel. Hierarchical Zionism is common among Israel's educated elites and interprets the Jewish right to self-determination as a right to hegemony within the Israeli state. It remains silent on the issue of the relationship between Israeli and non-Israeli Jews. Post-Zionist approaches, conversely, thoroughly reject these Zionist narratives regarding Jewish history and critique the rationale for the continued existence of the state of Israel as a Jewish state. Gans disagrees with all of these approaches, and in their stead advocates egalitarian Zionism, which is based on an egalitarian interpretation of the right to national self-determination and derives from the justifications for Zionism in its early years. As such, it interprets the historical link between the Jews and the land of Israel in terms of identity rather than property. It also views the link between Israel and world Jewry as a matter of choice for individual Jews--not as a matter of necessity, inextricably bound to their essence as Jews. He sees it as preferable to both the dominant strands of Zionism but also to the major contemporary anti-Zionist approaches: first, that of the Israeli post-Zionists offering a civic or post-colonial vision of a non-Jewish state, and, secondly, that of the mostly American post-Zionists who have a neo-diasporic vision for both Israeli and non-Israeli Jews in which the connection to the land of Israel is loose at best. Ultimately, the book
argues that egalitarian Zionism is superior to its rivals both in the authenticity of its relationship to Jewish history and in its implications for denizens of Israeland Jews around the world.