Askari: A Story of Collaboration and Betrayal in the Anti-Apartheid Struggle (Paperback) 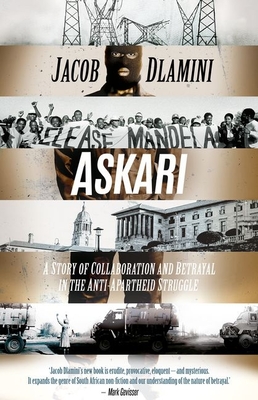 Askari: A Story of Collaboration and Betrayal in the Anti-Apartheid Struggle (Paperback)


Special Order—Subject to Availability
Winner of the 2015 Sunday Times Alan Paton Award (South Africa) 'Comrade September', a member of the ANC and its military wing, MK, was abducted from his hideout in Swaziland by South African security forces in August 1986 and taken across the border to South Africa, where he was interrogated and tortured. It was not long before September began telling his captors about his comrades in the ANC. By talking under torture, September underwent changes that marked him for the rest of his life: from resister to collaborator, insurgent to counter-insurgent, revolutionary to counter-revolutionary and, to his former comrades, hero to traitor. Askari is about these changes and about the larger, neglected history of betrayal and collaboration in the struggle against apartheid. It seeks to understand why men and women like September made the choices they did - collaborating
with his captors, turning against the ANC, and then hunting down their comrades. It seeks rather to offer a history of the
the grey zones in which South Africans - combatants and non-combatants - lived, rather than the black-and-white bifurcation that still dominates South Africa's politics and society. As the book demonstrates, September's acts of betrayal form but one layer in a sedimentation of betrayals in which he was betrayed by the Swazi police and may have been sold out to the Swazis and the South African security police by his own comrades in the ANC. This, then, is not a morality tale in which the lines between heroes and villains are clearly drawn. The book does not claim that the competing sides in the fight against apartheid were moral equivalents. It seeks to contribute to scholarly attempts to elaborate a denser, richer and more nuanced account of South Africa's modern political history. It does so by examining the history of political violence in South Africa; by looking at the workings of an apartheid death squad in an attempt to understand how the apartheid bureaucracy worked; and, more importantly, by studying the social, moral and political universe in which apartheid collaborators like September lived and worked.

Jacob Dlamini is one of South Africa's leading young intellectuals. He was recently awarded a PhD from Yale University. He is now attached to the University of Barcelona. Previously he worked as a journalist and was at one time the political editor of Business Day. His book Native Nostalgia (Jacana, 2009), about growing up in the township of Katlehong on the Witwatersrand, has won great acclaim.